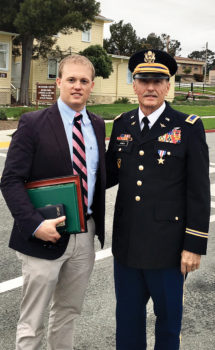 CW4 Daniel E. Jones (Purple Heart recipient) and son Daniel L. Jones – 44 years and after the persistence of an Army major, Vietnam veteran receives the Silver Star Medal March 8, 2016, at the Presidio of Monterey at the historic Weckerly Center.

“August 7, 1782, General George Washington announced in his Orders of the Day: The General, ever desirous to cherish a virtuous ambition in his soldiers, as well as to foster and encourage every species of Military Merit, directs that whenever any singularly meritorious action is performed, the author of it shall be permitted to wear… over his left breast, the figure of a heart in purple cloth… not only in instances of unusual gallantry, but also of extraordinary fidelity and essential service… shall be met with a due reward.”

In World War II, the Purple Heart was exclusively an Army decoration, and with rare exceptions, only soldiers received it. However, the distinguished decoration was finally awarded to Navy, Marine Corps, and Air Force veterans—any soldier, sailor, airman, or marine who sheds blood in defense of our nation is automatically awarded the Purple Heart.

It is estimated that 1.8 million Purple Heart ribbons have been presented since their inception, with more than half of those awarded for service during World War II. No doubt there are many more recipients of this, the highest honor of military service, but, in particular, we wish to salute and thank the members of Chapter 1958 in Chandler for their service to our country and especially to Mr. Dominic DiGiovanni, co-founder of Chapter 1958, whose father and grandfather were also recipients of the Purple Heart. However, it goes without saying that we salute all Military Order of the Purple Heart (MOPH) recipients, all Congressional Medal of Honor recipients, and all veterans.