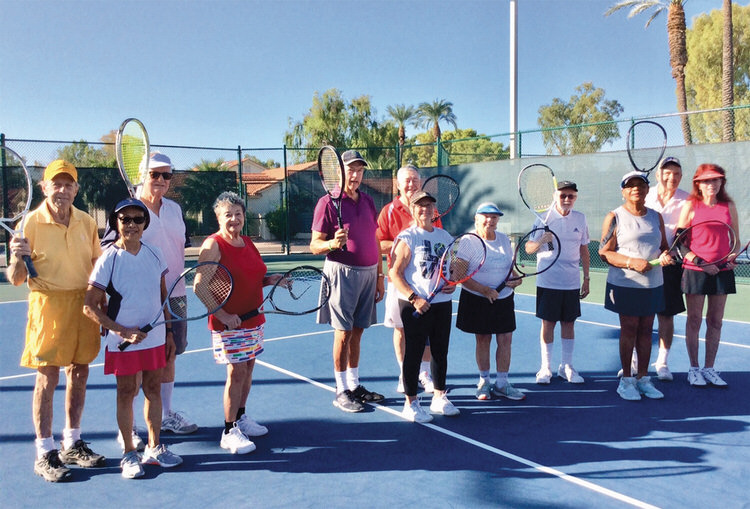 Three groups of mixed doubles players paused for a photo: Jerry Picker, Felisa Kulba, Carl Day, and Kay Strauman were on one court. On the second court were Tom Rhea, Angie Dodge, Rod Johnson, and Dolores Mahaffey. Leading on the last court was coordinator Dick Kane along with Sonda Giles, Jerry Higgins, and Bonnie DeGrenier.

Every Friday morning, the Cottonwood courts have mixed doubles play. That means each court has two women and two men playing. At the end of the first set, the players change partners. If there’s a third set, the men can play against the women, or they go back to the original partners. That’s usually what happens. With a man and a woman on each side of the net, the whole experience is a little more relaxed than the more competitive gender doubles.

Not many sign up for 10 a.m. mixed play, so the courts are open to leagues or any members who wish to play at 10 a.m. Mixed doubles allows husbands and wives to play together if they want, or maybe better with a partner other than a spouse. Either way, mixed doubles is challenging in a different way than gender doubles.

Dick Kane is the coordinator of Friday’s mixed doubles and enjoys doing it. “I think mixed doubles is fun, because it is more social than gender play. You get to play with and against more players than in gender play. And most of us ‘old men’ are gentlemen.”

If you have questions about getting into mixed play, contact Dick at 816-516-4466 or stop by the courts on Friday morning and see a lot of people having a lot of fun.

For information regarding membership in the Cottonwood Tennis Club, contact Barbara Jorgensen at [email protected]