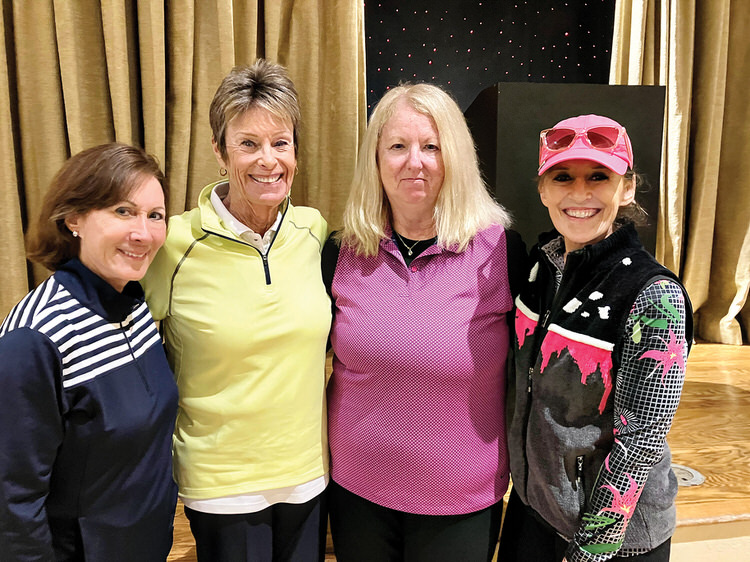 End of the year activities for OLGA were very busy. Our Member/Member tournament was held on Nov. 29, and new officers for the year 2023 were announced at the luncheon. Sharon Skowron will be our president, and Linda Anderson will be vice president. Denise Lott will be secretary, and Susie LaSalvia will be treasurer. OLGA Cup, low net tournament, was Dec. 6 and 13, with results to be announced in the next issue of the Splash.

Only the best nine holes were counted for POD on Nov. 22. Mary Perry and Eun Yoon tied for first place. Tied for third were Glo Malmberg and Roselyn Hoiby. There was a three-way tie for first place in Flight 2. They were Dang Teater, Julie Hastings, and Sally Berreth. Terry Jung won first place in Flight 3, Robin Thomas and Linda Thrash tied for second, and Dari Akin won fourth. Flight 4 was won by Mary Ann Woodward, Debbie Horner was second, and there was a three-way tie for third for Ladonna Wheat, Karen Stock, and Barbara Dinardo.

The Member/Member tournament was on Nov. 29. The winning team was Cindy Reinertsen and Eun Yoon. Tied for second were Peggy Cooper/Sue Pederson and Susan LaSalvia/Jeanne Wellivar. Tied for fourth were the teams of Sharon Bowditch/Glo Malmberg and Mary Figgis/Debbie Wood. In Flight 2 the team of Terry Jung/Sherry Rogers was first. Four teams tied for second. They were Barbara Anderson/Julie Hastings, Nancy Cohn/Sharon Skowron, Judy Kirschenbaum/Linda Smith, and Mary Spargo/Robin Thomas. Flight 3 was won by Kathy Burns/Beth Ebmeier, in second was Denise Lott/Pamela Powers, and tied for third were teams of Dari Akin/Doris Swanson and Debbie Horner/Shirley Weaver.

On Dec. 6 low net was the POD. In Flight 1 Eun Yoon placed first, second was Sharon Bowditch, third was Glo Malmberg, and tied for fourth were Mary Figgis, Mary Dyrseth, and Leslie Smith. Flight 2 was won by Anne Annis, Julie Hastings was second, and Dang Teater was third. Tied for fourth were Lorraine Blair, Joan Hammond, and Kelley Wojack. Dari Akin won Flight 3, second place was Terry Jung, and tied for third were Stephanie Raach, B.J. Schuller, and Phyllis D’Amore. In Flight 4 Linda Thrash was the winner, Beth Ebmeier was second, Kathy Burns was third, and Debbie Horner was fourth. Flight 5 was won by Doris Swanson, second was Janey Garibay, and Karen Beltz was third.

Our Charity event is scheduled for Jan. 24, and we will be collecting for St. Mary’s Food Bank where last year we contributed over $5,000 to provide meals for the needy. We hope to surpass that number in 2023. Linda Anderson, vice president, is organizing that event.