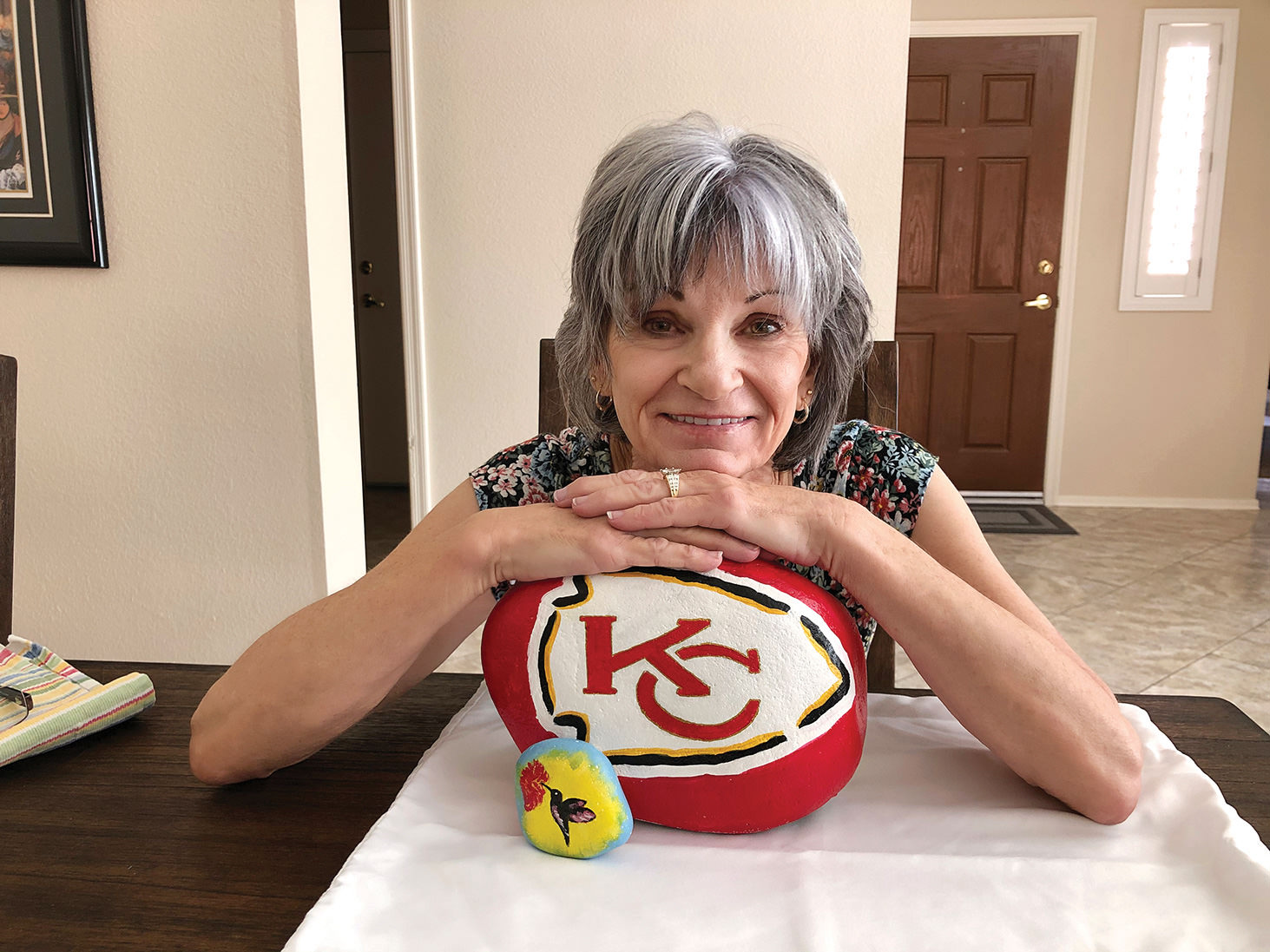 Sun Lakes resident Diane Haver has turned a pandemic hobby into a flourishing part-time job, painting logos of professional and college sports teams on stones from her backyard. Here she is shown with two of her specialties: a hummingbird and a logo of her favorite team, the Kansas City Chiefs. (Photo by Gary Vacin)

Kansas City Chiefs, Kansas State Wildcats, Arizona Cardinals—Sun Lakes resident Diane Haver knows them all. She has painted logos of these and numerous other NFL and college football teams on stones from her backyard.

What started out to be a pandemic hobby has become a part-time job as word has spread of her artistic handiwork around the Sun Lakes community. She has completed more than 25 stones for friends and neighbors to date. She recently received an order for six more from a Sun Lakes resident.

How did she get started? “I’ve never tried anything like this before,” she says. “I was never really interested in painting, but with the virus shutdown, I had nothing else to do. So, I started painting everything in my backyard—a weathervane, a fountain, a bench, and other items.”

Then she began painting creative designs on small rocks from her backyard before moving on to actual items. She likes hummingbirds, so her next effort was the tiny bird feeding from a red flower on a yellow background. She painted numerous other small stones before moving on to larger ones.

The long-time Kansas City Chiefs fan crafted a likeness of Chiefs’ quarterback Patrick Mahomes on a larger stone and placed it on her front porch.

Soon friends discovered her handiwork, and requests started coming in for logos from the Chiefs and other sports teams. She’s also done people’s names, commercial companies, and a logo of the State of Arizona.

Haver spends three to four hours on each project if she paints the front of the stone only. She has to let one color dry before moving on a second or third color, she said.

Several friends have asked her to paint the backs of their stones, so that takes her twice as long. Her most difficult project to date was a Kansas University Jayhawk logo.

Haver originally used stones from her backyard, but eventually painted them all and began buying stones from a local company. Most of her projects measure about six inches by nine inches, and she selects stones that will stand vertically in people’s yards.

Haver says she has enjoyed her new part-time job, in addition to her real job as a real estate agent. For additional information, contact her at 480-250-3425.