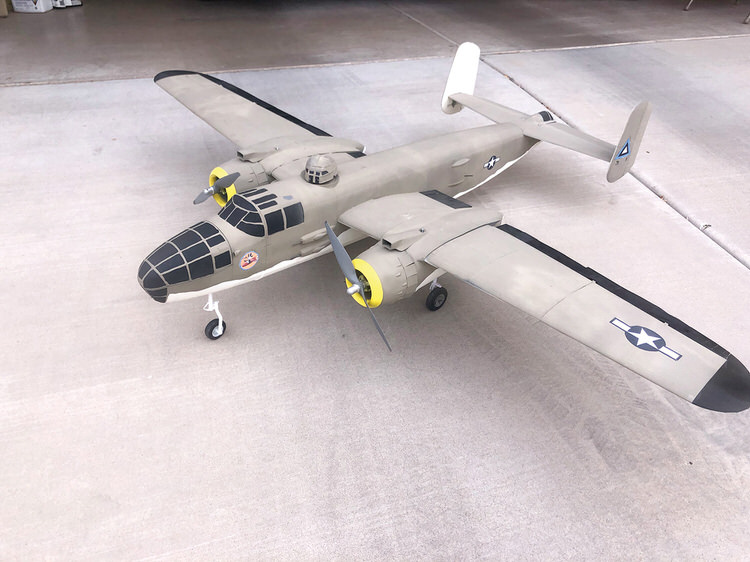 Sun Lakes Model Airplane Club member Ron Wasko will display a model of a B-25 bomber made on a 3-D printer at the Sun Lakes Aero Club gathering on Monday, Jan. 16. The public is invited.

The presentation on flying model airplanes originally set for Nov. 21 has been rescheduled for the Sun Lakes Aero Club gathering on Jan. 16, beginning at 7 p.m. at the Sun Lakes Country Club Navajo Room. The public is invited to attend.

The guest speaker will be Ron Wasco, a member of the Sun Lakes Model Airplane Club. Wasco will discuss enhancements in radio-controlled model airplanes and helicopters, and how technology has kept pace with full-scale airplane electronics and building materials.

Wasco will display a model of a B-25 bomber made on a 3-D printer. All flight controls, including flaps and landing gear, were developed using the 3-D printer and its state-of-the-art technology. The printer makes the various components of the aircraft, and they only need to be glued together.

The wingspan is almost six feet, and the airplane weighs about seven pounds ready to fly. This model has made several successful flights, and Wasco says it is a joy to fly.

Another topic is “first person view” flying. The pilot wears “goggles” that receive a video signal from the aircraft cockpit, and it is like flying a full-size aircraft as you are in virtual reality sitting in the cockpit of the model airplane.

The Sun Lakes Model Airplane Club was established approximately 20 years ago. Club members fly single-engine and multi-engine airplanes, helicopters, drones, and “special designed” aircraft that fly at speeds of up to 200 mph. The club moved from a Chandler location 10 years ago to a ranch in Florence, which has ample space to fly all types and sizes of aircraft.

The club hosts competitions for radio-controlled airplane pilots from the surrounding states who fly 50 percent full-sized aircraft, plus other events that draw competitors from across the U.S. and South America.

Both the Sun Lakes Aero Club and the Sun Lakes Model Airplane Club are official Sun Lakes organizations. The Aero Club sponsors gatherings that attract well-known speakers on the third Monday of each month, November through April. The next gathering on Feb. 20 will feature a presentation on latest developments at the Phoenix-Mesa Gateway Airport. For more information on the club, contact Cannon Hill at 509-539-7857 or Gary Vacin at 480-298-7017.