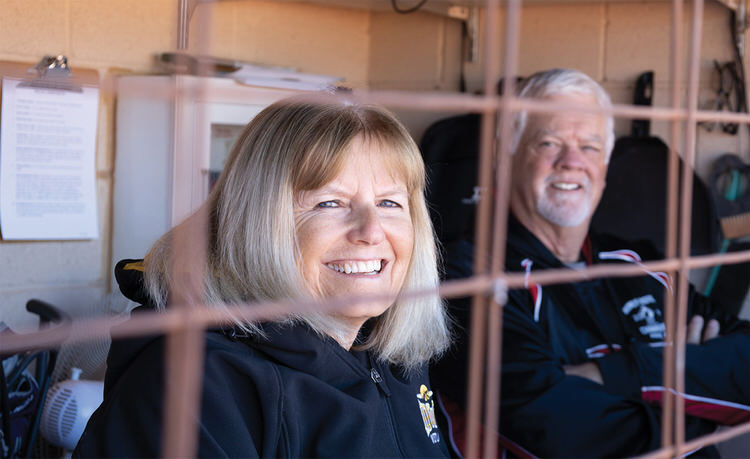 Scorekeeper Cyndy Hilby and scoreboard operator Frank Tanner are two of the many volunteers who contribute to the success of our softball program. (Photo courtesy of Picture Perfect Photos)

In two tight pennant races, the Redeemed Team and the Core Photography-sponsored team won their respective divisions. Manager Larry Kaufmann’s Redeemed Team edged out Manager Tom Bersano’s Leckner Realty squad by one game in the Sun Division, finishing with a 10-6 record versus the Realtors’ 9-7 mark. In the Lakes Division, the race was even tighter with Manager Gary Hillabolt’s Photographers finishing a half game better than Manager Joe Commisto’s A-1 Golf Carts team. The Photographers went 10-6, while the Golfers were 9-6 with one tie. Thanks to these four managers and team sponsors and these others: Managers Ron Carmichael, Tom Erpelding, Bill McCoy, and Randy Nuemann and team sponsors Skyview Digital Media, Spooner Physical Therapy, Wolfe & Associates, and the Young Realty Team.

We’ll cover more stats in a future edition of the Splash. In addition, the year-end tournament results will appear in next month’s edition.

For the first time since the advent of COVID, we held a social event for members, spouses, and significant others. Annual awards were presented at the function, including the following (Lakes Division winners listed first): Rookies-of-the-Year Brian Brockman and Greg Lemmon; Most Improved Players Manny Verdusco and Kurt Carmichael; and Sportsmen of the Year Bill Maxwell and Marty Hobby. Winners of the prestigious Spirit of Sun Lakes Softball Award were Jim Entwistle and Bill Jacobson. Established in 2010, this award is given to the member or members who go “above and beyond” in supporting our program. Winners are selected based upon their outstanding dedication, initiative, and service to our organization. Congratulations to Jim and Bill and all the other award winners and league leaders.