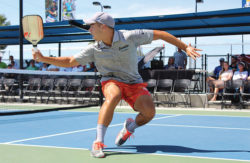 You will recall last year’s male Player-of-the-Year was none other than the Valley’s very own Dick Johnson, known to so many of us around pickleball in the Phoenix area.

The 2019 Men’s Pickleball Rocks Player of the Year was another no-brainer, according to the people at Pickleball Rocks who announced this year’s winner. The people who voted at www.NominateAPlayer.com simply overwhelmed the process with one name; Ben Johns!

It’s hard to believe Ben is only 20 years old, because it seems like he’s been around our great sport a long time. But believe it or not, he is just hitting his stride. Throughout the year, Pickleball Rocks polls Pickleball Nation to see the opinions of the people who play the game. When we asked “What Pro Player Do You Admire Most?” the answer inevitably came up Ben Johns. When they asked “What Pro Player Would You Like to Be?” the answer came back, Ben Johns. When we asked “What Pro Player Gives Referees and Line Judges the Least Amount of Trouble?” okay, they didn’t ask that question, but Ben’s demeanor and attitude on and off the court would surely place him at or near the top of that list, too.

Players across the country and the world love the way he plays the game and made it clear there was no close number two this year. Ben’s playing statistics for 2019 were simply amazing: In eight Pro Singles Events, only one player was able to beat him (Tyson McGuffin—twice). Ben came away with six titles including the coveted USAPA Nationals Gold medal at Indian Wells. But as dominant as Ben was in singles in 2019, his domination in men’s doubles was almost unbelievable: 16 Pro Level Men’s Doubles Events—13 Gold Medals. Fantastic!

Thank you, Ben, 2019 Pickleball Rocks Player-of-the-Year, for being such a great example of what a pickleball player should be. You rock, Ben Johns!

Have a question about pickleball? Want to know more about the sport, the rules, equipment, or have some pickilicious news you would like to share with our pickleball community? Email David Zapatka at [email protected]