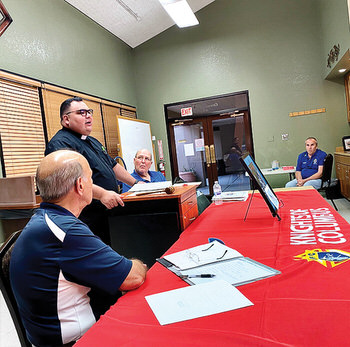 Reverend Mr. Marvin Soto was guest speaker at the Knights of Columbus membership meeting held in Sun Lakes on June 21. He was among several prospective priests to whom Council 9678 gave financial assistance during their years of preparation. He spoke of how helpful these funds from the Knights were in paying for books and other instructional expenses that were not covered by the church. Since the early 1990s, the Sun Lakes-based Knights have made semi-annual financial contributions to as many as three seminarians from the Phoenix Diocese.

Born in Mexico City, Rev. Soto came to Phoenix when just five years old. He completed elementary school in Glendale and high school in Mesa. A member of St. Simon and Jude Parish in Phoenix, Rev. Soto said he gave a lot of thought and prayers to becoming a priest. Fluent in English and Spanish, he spent his first year of seminary training in Mexico City.

He described the two common systems of seminarian training: the large, communal seminary—often made up of several hundred seminarians—found in many countries, and the small, 8- to 12-member inclusive households found in Phoenix, Denver, and other American cities. He has experienced both systems but prefers the household model, because it more realistically portrays the life of the average parish priest. At the Nazareth House in Phoenix, he and the other residents engage in cooking, cleaning, gardening, shared meals, meditation, study, religious discussion, group prayer, and fellowship.

For the last few years, he attended the North American College in Rome, located near the Vatican. Life there was more structured—much like a college campus—where he was in a class of about 60 men, out of 230 seminarians enrolled that year. Each week consisted of five days of classes, group meals, periods for rest/study, and morning and evening prayers. Weekends, however, were free days for travel to other parts of Italy as well as adjoining countries, made possible by the vaunted European rail system and inexpensive flights.

Rev. Soto also did missionary work with the poor in Honduras, India, and Mexico. He described visiting the homes of poor residents, often sharing meals with the families. “Working with the orphans and poor like those Mother Theresa served in India was a truly humbling experience,” he said.

He expects to be ordained this fall; however, the pandemic has already delayed this by a year! “Whenever it occurs, Council 9678 members are invited to attend!” he said. In the interim, he serves as Deacon at several area churches.

At the end of Rev. Soto’s presentation, Brother Marcel Baadte, Chairman of the Council’s Seminarian Fund, presented him with an honorarium to help him get through the months until he is ordained and assigned to a church in the Diocese. The Knights gave him a standing ovation for his excellent presentation!