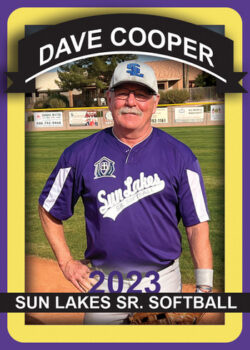 Dave Cooper has had a “very diverse career,” including the local radio industry. From 1994 to 2001, he worked at Phoenix radio station 95.5, KYOT, as a full-time production assistant, public service director, and weekend on-air personality, known as Coyote Dave. He later joined 91.5, KJZZ, for a couple years as a DJ. He also hosted a daily afternoon Internet radio show on Radio Free Phoenix playing eclectic rock ‘n’ roll and has emceed many concerts and music festivals. Additionally, he’s been a writer for local publications, including a web magazine called Music & More, focusing on entertainment, concerts, music reviews, and festivals.

But let’s begin at the beginning: Dave was born in Florida, but his family moved to Chicago when he was six. He spent his formative years there. Although he loved sports and was very good at most, he was unable to play high school sports because his stepfather had a landscaping business. Dave and his brothers were the crew; there was no time off for sports. His first non-family job was as manager of exterior maintenance for a large apartment complex.

After nearly 10 years of that, Dave moved to Tempe where he enrolled at ASU at age 26. He eventually earned a B.S. in broadcasting and English, working his way through college as a manager and bartender for Minder Binders Bar in Tempe. It was after that when he began his main career in the radio industry. More recently, his professional career focused on inside sales, marketing, and business development, finally retiring last year.

Dave started playing softball back in Chicago at age 20 and has played every year since for the past 45 years. He’s been a real softball junkie, playing on numerous area teams and traveling tournament teams over the years, playing nearly every night. Dave and Dan Melosi were teammates in Tempe for a couple years around 1986-1988. Once, he was on seven teams at the same time! He says that when he was younger, he played “11 nights per week!”

He joined our league last year, hitting over .650 and providing solid defense as an outfielder. Dave said he’s delighted to be a part of our program and has already developed many great friendships.

Coop was a lifelong bachelor until four years ago. He waited over 30 years to find the “right one,” who just happened to be a lady he’d dated in 1988. They reconnected in 2016 and married in 2018. Lorin is still working as Senior Regional Sales Director for a pharmaceutical company while Dave is the self-titled “Domestic Engineer and Critter Wrangler” in their household. You see, their household includes five small dogs, three big cats, and some fish! (They came as a package deal with Lorin!)

Dave and Lorin enjoy traveling, even though she travels a lot for work. They have big plans for trips to the Caribbean, Europe, and Kauai next year. Good things really do come to those who wait!