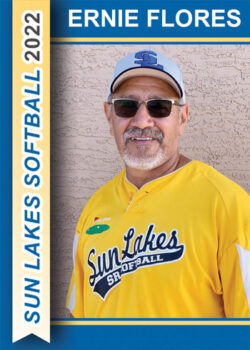 After high school, Ernie went to a St. Paul technical college and became a certified pipefitter. This would lead to a 42-year career in the pipefitting trade. He initially worked for a few companies in the St. Paul area for over six years before being hired by the University of Minnesota where he would enjoy a 36-year career. He was involved in new construction jobs, maintenance programs, and parts-making for the University.

Ernie met his wife-to-be Sherri while they were in high school. They’ve now been married for over 40 years and have four children: daughters Sarah, Celena, and Jessica and son Brandon. There are now 12 grandkids and one great-grandson. Sarah lives in nearby Tucson, while the other two girls are back in St. Paul. Brandon lives in Wisconsin.

Surprisingly, baseball and softball weren’t really Ernie’s “thing” as a young man, because he’s now one of the top players in our Lakes Division. In the recently completed Fall Session, he finished second in the league in batting with a .744 mark and was in the top 10 in singles, doubles, triples, and slugging percentage. Maybe softball is his “thing” now!

Although Ernie did play some softball in his 20s and 30s, he was more into coaching Pop Warner football and youth basketball teams. He’s also had a longtime interest in fishing and hunting. He’s done a lot of fishing for walleye and hunting deer back in Minnesota. This past December, his number was drawn for an elk tag, and he went hunting with fellow softball player Jerry Smith on Jerry’s property in Williams, east of Flagstaff. He says it was the shortest hunt of his life, as an elk was spotted within minutes of their arrival at the hunting location. The elk was bagged with a shot from 80 to 100 yards, and that was it! Hunt over!

As is true for a lot of Sun Lakers, Ernie has recently gotten into playing pickleball, too. Additionally, he and Sherri enjoy hiking and travel. Pre-COVID-19, they did a lot of getaways to Mexico, primarily Puerto Vallarta and Cancun, and hope to be able to do that again soon. They also enjoy family time, including watching the grandkids participate in sports and other activities.

Sherri and Ernie became snowbird residents of Sun Lakes about four years ago after Ernie retired; however, they still spend the months of May through October at a cabin they own on beautiful Lake Osakis, Minn., which is noted for its healthy stock of walleye, panfish, and bass. That allows them to enjoy the “good life” twice over, both in Sun Lakes and in Minnesota!