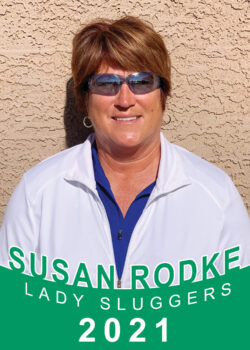 Susan Rodke (nee Griffin) was born in Billings, Mont., and then lived briefly in California as a young child, before her family settled in Minnesota. She spent most of her childhood in Fergus Falls before the family moved to Barnesville when she was in high school. She was a four-sport athlete for the Barnesville High Trojans, as a member of the basketball, tennis, track, and volleyball teams. She also played in a ladies’ slow pitch summer softball league. She began her “softball career” as a 10-year-old, playing alongside her mother, two sisters, and other adults. She’d continue playing in various leagues for the next 28 years before deciding “she was getting too old” and retired from the sport, at least that’s what she thought at the time!

During that period, she played on both ladies and mixed teams. Her mixed teams were very competitive, qualifying for national championship tournaments many times and winning the National Open title in 1995.

She was good enough at high school basketball to earn a scholarship to Bismarck (N.D.) Junior College, where she also played on the tennis, track, and volleyball teams. It was there that she met her future husband Chuck. After their marriage, they relocated to the Twin Cities area. They lived the majority of the time in Eagan, a suburb south of St. Paul.

Susan was employed by the McKesson Corporation for 15 years, working in that company’s shipping and receiving department. McKesson is a multi-billion-dollar corporation that distributes health care systems, medical supplies, and pharmaceutical products throughout the U.S. and internationally. She also had several “odds and ends” jobs while raising their two boys. The Rodkes are justifiably proud of their first-responder sons. Their oldest son Matthew is a police officer in North Dakota, while their youngest Joshua is a fireman working in Oregon.

Chuck was in the Minnesota Air National Guard for 35 years, retiring with the rank of Colonel at a relatively young age in 2017. Susan and Chuck first retired to the beautiful Lake Lida area, a fishing and boating resort region near Pelican Rapids, Minn. But with their family “spread out,” there was nothing to anchor them to Minnesota, so they decided to follow the sun and warmth to Sun Lakes, Ariz., where they could enjoy outdoor activities year-round.

Susan and Chuck both enjoy golf, playing at both the Oakwood and Cottonwood country clubs. Susan’s also really into pickleball, playing ladies and mixed doubles. She’s consistently rated a level 4.5 or higher on a scale of 5.0. That means she’s really good!

It was here in Sun Lakes that Susan began playing softball again. She’s now a member of our Lady Sluggers team, playing the key position of shortstop. She’s a super fielder with a strong arm and also hits for both average and power. Her sister Sharon is also a teammate. I guess Susan really wasn’t too old for softball after all.