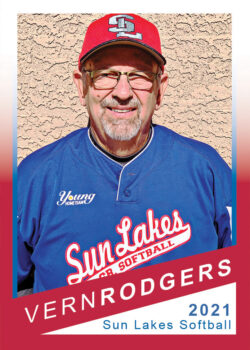 Vern first joined the Kroger Company in Coldwater, Mich., and spent 11 years in various management positions with them. With that experience, he decided to go into the grocery business himself, so he opened a combination grocery/meat market/party supply store in the resort town of Colon, Mich. After working very long hours with little time off for over two years, Vern decided that the 9 to 5 life wasn’t that bad after all. He then joined the Tractor Supply Company in Kankakee, Ill. After working in several positions with them over an eight-year period, Vern got the entrepreneurial itch again.

His ventures included purchasing and operating Bucky’s Lounge back in Quincy and buying and running two Showtime Pizza places, one in Quincy and the other in Sturgis, Mich. He then owned and operated three waterbed and furniture stores before opening a used car lot.

After all of those adventures, Vern went to work for the Home Depot. Over an 11-year period, he held several high-level positions, including department manager, assistant store manager, and manager-on-duty. During this time, Vern’s late wife Darlene was enduring a long battle with cancer and wanted to be near family. Luckily, there are Home Depots all over, so Vern was able to transfer to locations near family. Their family kept relocating due to work requirements, and Vern and Darlene were able to follow along. Vern worked in eight different Home Depot stores in Michigan, Colorado, Washington, and Indiana, with his last stop in Lafayette.

Sometime after Darlene’s passing, Vern’s daughter encouraged him to try to move on. He was fortunate to meet his current wife, Janet, on the Christian Mingle dating website, and they’ve now been together over eight years. They have a blended family of five kids, 11 grandchildren, and one great-grandchild spread among Arizona, Indiana, Michigan, and New Jersey, so in normal times, there’s lots of family-related traveling and visits.

Janet and Vernon were heavily involved in church-related activities prior to retiring and relocating to Arizona in 2015. They’re now members of the Sun Lakes non-denominational church.

The Rodgers enjoy travel (they’ve been up and down both coasts) and plan to do lots more post-pandemic. Janet’s also a golfer, while Vern “dabbles” at it, playing a few times per year. He’d like to play more, but softball has the priority.

Vern started playing in our softball program in 2018. Last year, he led the Lakes Division in home runs and finished in the Top Ten in several other offensive categories. This year, he’s also taken the reins as one of the team managers in the Lakes Division.

After reading Vern’s story, maybe the Beatles’ “The Long and Winding Road” should apply instead. And that road has led to a very good place.