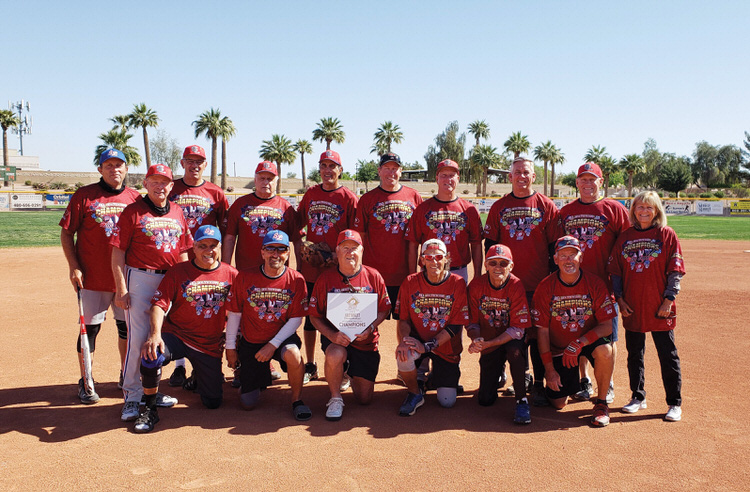 Nineteen members of our Sun Lakes Senior Softball Association were on championship teams in the annual Southwest Tournament, sponsored by Senior Softball-USA. The tournament was held earlier this year, with over 250 teams from a dozen states participating. The event was conducted at eight different softball complexes in Las Vegas and surrounding communities. The teams are divided by age group and skill levels. Here’s a listing of our championship players along with their team names and divisions:

In addition, we had three other players who were members of teams that finished second in their divisions: David Boone, Tim Loeffler, and John Seigla.

It was quite a showing by our guys and demonstrates the caliber of players we have in our Association. Congrats to all of our champions!

Our summer recreational program is in full swing with the Field of Dreams open on Tuesdays, Thursdays, and Saturdays for pick-up games. Game time is 8 a.m. with optional batting practice at 7:30 a.m. for those participating in the pick-up games. Batting and fielding practices are held on Mondays, Wednesdays, and Fridays at 8 a.m. If you’re interested in getting involved in our program, now’s the time to sharpen your skills for the upcoming league play which will begin in late October. Just come by the field with your glove and bat and ask to talk to a board member. Additional information is also available on our website www.sunlakessoftball.com.

Baseball Fun Fact: In his very first major league at bat, rookie pitcher Hoyt Wilhelm hit a homerun. The future Hall of Famer’s career continued for 21 years, but he never hit another homerun!