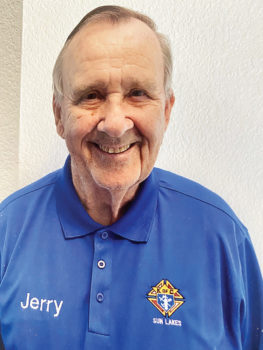 Sun Lakes Council 9768 of the Knights of Columbus (KC) was recognized recently as one of seven Councils (out of 154) in the state of Arizona to get a bonus for sales of state charity lottery tickets. Jerry Higgins, local chairman, said more than 50 knights sold one or more tickets. One knight sold $300 worth! By cooperating with the Knights, the local Saint Vincent de Paul charity received $1,680 from the state KC lottery. Jerry also spent the day at the Sun Lakes Women’s Association Golf Tournament, selling state raffle tickets. Council 9678 sponsored the 16th hole and returned a portion of ticket sales back to the Sun Lakes Women’s Association, for a total of $280 paid to this charitable organization. In the state raffle, one-half of local sales are returned to the local councils, according to State Chairman Dennis Sullivan. This amount, along with the bonus, can be used by the local council for local charities and administrative costs. Internationally, the Knights give nearly $200 million to charity and contribute over 70 million man hours annually of volunteer work to local communities.

Local campaign chairman Jerry Higgins is a Chicago native who joined the Knights in 1975 at the Coronata Council 3806, Calumet City, Ill. In 1994, he and his wife Barbara moved to Chandler. In 2011, the couple moved to Orlando, Fla., but returned to Sun Lakes in April 2018, when they joined the St. Steven’s Catholic congregation. Always an active knight, Jerry was a member of the 1979 Illinois K of C State Champion Bowling Team. In Sun Lakes, he currently serves as council treasurer and has been the director of the Cottonwood tennis program for the past two years. He is also a participant in collecting local data for the U.S. Census. Barbara was Jerry’s able assistant in the state raffle. She served for several years as an office manager for the Manpower Temporary Services in Chandler. The couple will celebrate their 57th wedding anniversary in November 2020.