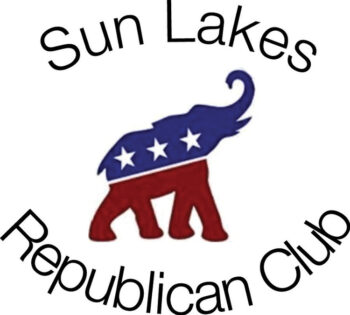 The Sun Lakes Republican Club will feature “Election Year Insights” with candidates for Governor, U.S. Senate, Arizona Attorney General, and Treasurer at its monthly meeting on Wednesday, May 11, at 6:30 p.m. in the Navajo Room of the Sun Lakes Country Club, 25601 S. Sun Lakes Blvd., Sun Lakes, AZ 85248. The public is invited! Please bring your neighbors and friends! Our mission is “Education for an Informed Electorate.”

Candidates who will present their vision for preserving life, liberty, and the pursuit of happiness include Gubernatorial Candidate Kari Lake, and U.S. Senate Candidates Jim Lamon and Attorney General Mark Brnovich.

Kari Lake is the former anchor for Fox 10 News in Phoenix who walked away from the mainstream media, despite being number one in the ratings for more than two decades. She is running for Governor of Arizona on a platform of common-sense conservatism dedicated to individual liberties, low taxes, limited regulation, and protecting Arizona’s great Western heritage. Kari Lake will discuss cancel culture, critical race theory, and the devastating effects that progressive policies are having on America’s formerly great cities.

As a candidate for the U.S. Senate, Jim Lamon is dedicated to putting America First, just as he has done as a business leader. To focus on his commitment for AZ US Senate, Lamon sold his company DEPCOM at the end of 2021. Jim’s company was an industry leader in pursuing a “Made in America” policy. Jim Lamon served six years as an Army Airborne Officer, with three of those in Germany during the Cold War where he saw the stark difference between American freedom and Communist oppression. Jim will insist on securing our borders, requiring E-Verify, and deporting the illegal immigrants who endanger our communities. Jim advocates for a more streamlined federal government that spends less, has fewer regulations, and is mission-focused on delivering core essentials to the American taxpayer.

Mark Brnovich is the current Attorney General of Arizona and has served for seven years. He assumed office on Jan. 5, 2015, and was reelected in 2018. Brnovich is running for election to the U.S. Senate to represent Arizona. Brnovich served as a Command Staff Judge Advocate with the Army National Guard. He has worked as the Director of the Center for Constitutional Government at the Goldwater Institute, as Assistant U.S. Attorney for District of AZ, as a prosecutor with the Maricopa County Attorney’s Office, and as Assistant Attorney General of Arizona.

Attorney General candidates will speak about their proposed solutions for many of the key issues of concern to Arizona voters, including how to handle the rise in human and drug trafficking across our southern border, as well as how to ensure that all future Arizona elections will legally conform to the requirements set forth in our Arizona Constitution, including proof of U.S. citizenship.