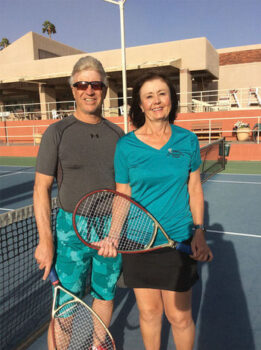 Something special happens when both husband and wife play tennis. There’s a special bond during competition. We introduce you to Dean and Maryann Sinerius. Both are “green” players, so they could play together in tournaments, except this year. Dean claims, “You can learn a lot about people by the way they play tennis.” They have lived in Sun Lakes full-time for five years. Prior to that, they lived in Carlsbad, Calif., which Maryann describes as “Heaven.”

Maryann has played tennis off and on since her 20s. Dean began playing after he met Maryann. Because of their jobs and family, they were unable to play as much as they wanted until they moved to Sun Lakes.

“CTC was one of the main reasons we moved to Sun Lakes,” said Dean. “I observed the CAN-AM event one day while driving around and told Maryann, ‘We’re moving to Sun Lakes.’” The rest is history.

Maryann was recently elected Cottonwood Tennis Club’s vice president for the coming year. Dean has started a men’s singles league which is in its second year. It is not a club-sanctioned league, but Dean invites anyone interested in playing singles to get in touch with him. Tennis is not the only thing they do either. They play golf and really enjoy playing with “the great couples they have met along the way.”

Dean was born in Deer Lodge, Mont., and Maryann hails from Rochester, N.Y. They met at a singles event at a Minnesota Timberwolves basketball game and have been together for 28 years. They have three sons, three grandsons, and a new granddaughter, all of whom live in the East Valley.

Dean has been in the aviation industry his whole life. He started in the U.S. Navy as a P-3 flight engineer (flying over the ocean searching for submarines). After the Navy, he went to work for Northwest Airlines and now works for Mesa Airlines.

Maryann has worked in business machines and operations for companies like Ricoh and Kodak. She still works part-time and enjoys every minute of her part-time retirement.

“We are extremely grateful that our children and grandchildren are close by.” said Maryann. “We spend as much time with them as possible.” They also love to have friends over for a low-key meal, drink, and an occasional game night. Maryann and Dean can’t wait for life to get back to a “New Normal.”

Most people can’t wait to retire so they can travel. Not Dean and Maryann. “I traveled so much with work,” said Maryann, “I like to stay home and sleep in my own bed!” Plus, when Dean was with the airlines, they had opportunities to travel a lot. Now, they are exploring the idea of getting an RV, keeping their feet on the ground, and taking “home” with them on the road.