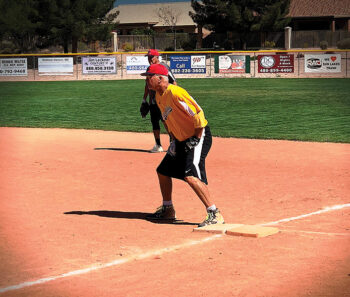 New manager Mike Otman is in the spotlight; Mike at first base during the spring season. (Photo courtesy of Just Shoot Me Photos)

If you’ve ever played the game and been hit by a line drive or errant throw, you might wonder why the ball is called a softball—it’s hard as a rock!

Well, to answer that question, we have to go back to the game’s founding in 1887. George Hancock, a reporter for the Chicago Board of Trade, is credited with inventing the game of softball. Legend has it that Hancock and some friends were at the Farragut Boat Club awaiting news of the Yale-Harvard football game. When the news came that Yale defeated Harvard, a Yale supporter enthusiastically picked up an old boxing glove and threw it at a nearby Harvard alum, who promptly tried to hit it back with a broomstick. This gave Hancock the idea of playing a game of indoor baseball. He tied together the laces of the boxing glove, which would be the indoor ball, and, of course, it was soft!

Over the years, the game was known as indoor ball, kitten ball, pumpkin ball, and mushball, among others. The name softball wasn’t used until the mid-1920s. Why softball? Why not big ball, since a softball is much larger than a baseball? There are a couple theories other than the “boxing glove” theory. One is that in the early days of baseball, the game was often called hardball. So, it might make sense that the larger ball was given a similar-sounding name: softball. Another theory is that the core of a softball is made of a mixture of cork and rubber, a rather soft material. Who knows? All I know is that the ball is hard, very hard, and I’ve had the broken fingers, split chin, and bruised shins to prove it!

On to the news: the Sun Lakes Senior Softball Association is planning to return to league play on Oct. 27, assuming the COVID-19 metrics remain “under control.” Many social distancing protocols and safety rules will be implemented to attempt to keep everyone safe. Go to our website for additional information.

Managers have been named for the Fall Season. In the Lakes Division, the four managers are Tom Erpelding, Gary Hillabolt, Bill McCoy, and Vern Rogers. The Sun Division managers are Ken Brenden, Mike Gloyd, Mike Otman, and Randy Neumann. Vern Rogers and Mike Otman are new managers this year, while the others are returning veterans. Thanks, guys, for stepping up to the plate!

Our website and email “blasts” to current members will provide additional information regarding registration for the new season. The registration deadline will be Oct. 15. Registration will be held at Snedigar Field in Chandler while the Field of Dreams is being overseeded.