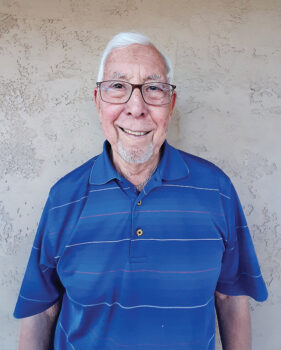 He’s Loved and he Inspires us

This fella’s name is Henry Huss

His pieces usually made with wire

Take a look you will admire

Some with silver some with gold

Some have stones within a fold

Check them out you won’t believe

How beautifully he forms a weave

How does he do it people ask

Impossible does seem the task

He also does a wire wrap

Around the stone he makes a lap

Then two or four or maybe eight

When he is finished it looks great

To make it hang he forms a bale

You’ll buy it when it says for sale

Or better yet, his class just take

He’ll teach you and you’ll come away

Saying “What an awesome day.

Talent … Didn’t know I had

Wow my piece is really rad.”

You know he won’t leave you behind.

So give a call and make that move

Put yourself within the groove

A silver bracelet you can wear.

A Hobby or a Labor of Love?

Forty-five years ago, Henry joined an adult class in basic stained glass; nothing complicated, simply enjoying each other’s company. He went on to take other classes taught by experts in their field. One class was wood framing where he developed the skill of making 18th century ship models from scratch. After finishing his 12th master level model (some taking him 12 months to complete), he moved on to other hobbies.

Henry William Huss was born in the Fall of 1933 in Lakewood, a quaint winter resort in central New Jersey. He graduated from Lakewood High School where he, with his brother, played on the varsity basketball team. He was also lead choir member in his grandfather’s church. For six summers he spent time working as a “handy boy” at a boarding house in the Pocono Mountains in Bushkill, Pa. In the Summer of 1951, he started working for Uncle Sam at the Great Lakes Naval Training Center in Chicago. Four years were spent in Naval Aviation working on aircraft carrier fighters. This stint got him a free ride to college in Trenton, N.J., to study business education, immediately after which he was hired to teach at a high school in Mt. Holly, N.J. He spent 31 years in education, climbing the ladder as adult school director to principal to assistant superintendent. For 15 years, he and his wife Henrietta spent summers in Ocean City, Md. In 2000, they relocated to Ironwood in Sun Lakes, as snowbirds, “loving the links.” He also joined the Sun Lakes Rock, Gem and Silver Club and began teaching Dichroic glass fusing. After taking a silver class, he started teaching woven wire bracelets and wire wrapped glass. This summer he sold his home in New Jersey and is now a full-time Sun Laker. Make your own wire bracelets and more; take a class from Henry! For more information, check our website at www.slrgs.com.