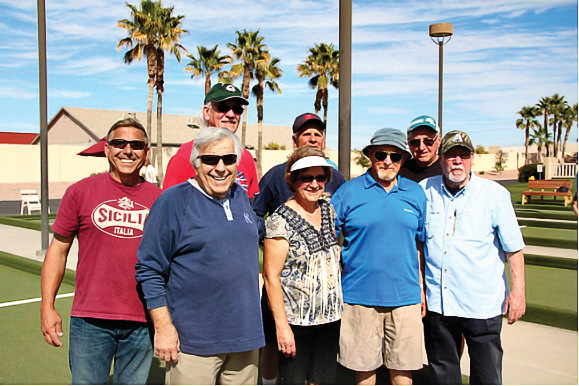 February highlighted the Bocce Club’s first of two scheduled tournaments for the year: The Tournament of Champions was held at Sisk Park on Feb. 20. It was a wonderful day, with the weather cooperating. The club’s social directors Karen and Neil Donohoe were on hand early at 10 a.m., preparing hot dogs and baked beans with chips and all the fixings, along with soft drinks and water.

The tournament started at 11 a.m. with the preliminary round, followed by the semi-final round, and concluded with the final round pitting Marie and Tony Racano against Doc Heckler and Mike Buscaglia.

It was a close match, with Doc and Mike taking down the first-place prize of $100, outlasting Marie and Tony 11-9. Third place went to Harley Pansch and Larry Vanderslice, beating Joe and John Terranova 11-6

The final day for the second session of league play was March 20. The club conducted its Low Hanging Fruit Tournament on March 24.

We concluded our season on March 27 with the second session awards banquet and membership confirmation of our board of directors for the 2022-23 season.

We want to remind all residents interested in the Sun Lakes Bocce Club for the 2022-23 season that the club will continue to provide bocce instruction throughout most of the spring and summer months for those interested in learning to play the game. Simply forward an email to [email protected], attention Mike Buscaglia, to request information.

Any Sun Lakes resident can learn more about our club by going to our club website www.sunlakesbocceclub.com.

A special thanks to Greg DePaola, General Manager, Coulter Motor Company of Phoenix, for their first-year sponsorship of the Bocce Club, and to John Skoko, Fleet Sales Manager, 480-940-6001, for his participation in our awards banquet.