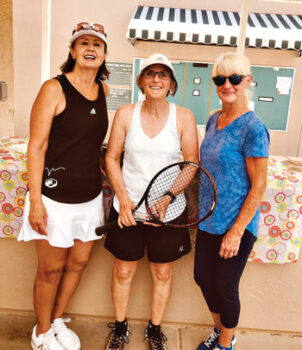 As the season progressed, we had a lot of unavoidable absences and had to rely on our sub list. Fortunately, we had a healthy list of ladies willing to fill in where needed, which included Nancy Kelley, Pam Schormann, Julie Evans, MJ Robinson, Kathryn Campbell, Kris Ongert, Denise Peterson, Julia Romanin, Barb Jorgensen (club secretary), Tina Sanders, and Kathy Moliter. A big thank you to our subs who helped our league to have such a successful season.

We started the spring playing three sets with normal set scoring, but as the weather got hotter, it became difficult to get three sets in, so we switched our scoring to eight games per set, allowing each girl to serve twice in each set, a typical way of playing in the summer months.

Congratulations to Linda Dirksmeyer, Maryann Sinerius, and Gwen Lucas for most games won. Continuing with our new tradition, we kept track of most aces, with the award going to Cindy Cloke. For kicks and laughs, we kept track of most defaults, too, and we had three gals with perfect attendance. All of our ladies are winners, and it was a pleasure to organize this league for the first time, as I took the reins from Susie Dunn who did a successful job since she started this league back in 2008.

We concluded our season on May 16 with a fun ice cream social on the veranda, which included awards, prizes, and lots of laughs. It was a pleasure and convenience to utilize our newly remodeled building, which includes a racquet room.

Here’s to another great season. Wishing all the girls a safe and healthy summer.

Please visit our website, www.cottonwoodtennisclub.com, to find out the latest activities in our club.