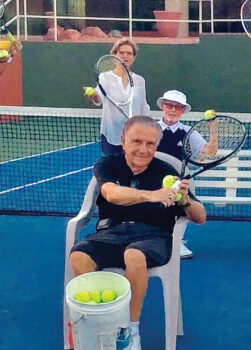 Pierre Moresi and some of his students posed for this photo last year.

For many years, Pierre Moresi spent every Monday night at the tennis courts teaching beginning players the joy of tennis as well as helping other players upgrade their skills. On Thursday evenings, he was there, too, supervising drop-in play. The free clinics he and Don Neu started have become an institution. His students respected and loved Pierre as a friend and teacher.

Pierre Charles Moresi, 84, passed away Jan. 6, 2022. He was Born in New York City on Dec. 20, 1937. When he was seven, his parents Catherin and Pietro Moresi moved to Southern California and lived in Venice and Beverly Hills before going to San Francisco.

Pierre was always very athletic and loved playing baseball, but his real passion was tennis. He graduated from Galileo High and took accounting courses at San Francisco City College. He went on to pursue a career in banking. He started at Bank of America as a vault teller. He met his wife Tina there. She worked at BOA as a secretary. They were married Nov. 1, 1959. Pierre then moved to Wells Fargo as bank examiner/vice president. After 35 years with Wells Fargo, they decided to take early retirement and moved to Sun Lakes. Pierre and Tina have four children.

It was then that Pierre’s passion for tennis finally took priority, and he, along with Don Neu, started the free tennis clinics at Cottonwood. He found real joy in turning a person who had never played before into a tournament player. He also helped many players beef up their skills and learn new strategies. He was a great teacher, as well as an excellent player. His students really appreciated him and often came back to thank him after they left the class.

Pierre is survived by his wife Tina. They had been married 62 years. He is also survived by their children Denise, Michael, Lisa, and Paul; six grandchildren; and his brother Steven.

He will be forever loved and missed by everyone who knew him, particularly his Cottonwood tennis students. Many of his beginning students later became winners in CTC tournaments and the Bradshaw Tournament. Some came back to become assistant teachers in the free clinic program. The number of hours Pierre donated to the clinic program can’t even be counted. He was a very special man who will be enormously missed. No memorial is planned due to COVID-19 and also his wishes.