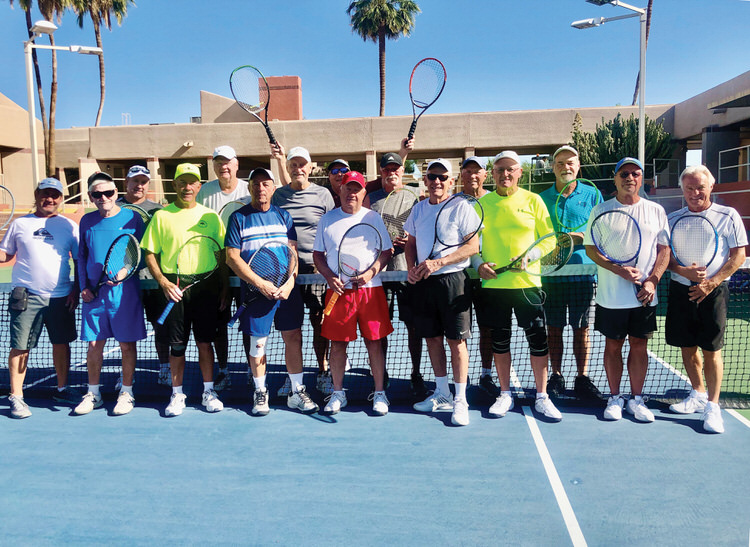 Cottonwood Tennis Club slows down in the summer, but there’s one league that is just getting started—the Thursday Men’s League. Spencer Roberts is the coordinator. They play from 8:30 to 10 a.m. every Thursday. While some of us escape the 110-plus temperatures, this league is designed so that guys who need to miss a week occasionally are able to take a week off and return and still be in the league.

The summer league began April 7 and continues through September. That makes it the longest continuing league in the Cottonwood Tennis Club. There is no obligation to play every week. Flexible scheduling is essential, considering summer trips, etc. Players compete whenever they choose by signing up in advance. Some Thursdays they can have as many as 28 players or as few as 12. Play is scored on an individual basis, with each player earning points for games won each week. A winning percentage is calculated for each player based on the weekly totals. Players are assigned to courts each week with other players with similar winning percentages, so competition is balanced.

At the end of the long season, the individuals with the highest winning percentages in each group are recognized. The two groups playing in the league are the Red Level (highest) and Green Level (second highest). All the players enjoy this manner of organization, because they don’t have to be available every week, as is true of the fall and spring leagues.

Don’t forget about the Palo Verde courts. The two courts there are open for play the entire year. There are no leagues or other organized competitions on those courts. You just go sign up on the board on a first-come, first-served basis.