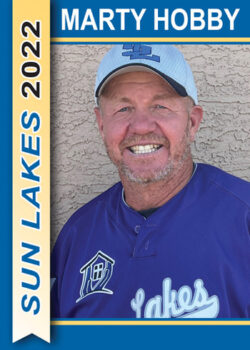 Rockford, Ill., native Marty Hobby seems to have been born with a baseball in his hand. From pitching a perfect game as a Little League hurler to going 7-0 with 49 strikeouts in 49 innings as a high school senior for the Rockford West Warriors, he was always the star. After playing summer baseball, then softball until his mid-30s, he took a long hiatus from the sport to focus on raising his kids. He coached his two boys in youth baseball leagues and later was an assistant high school coach when they played at Stillman Valley High. So, he was still around the sport, just not playing himself. That changed when he retired and joined our Sun Lakes league last year. Unbelievably, after 25-plus years of not playing, he stepped right back into his star-studded cleats and is arguably our top all-around player. He’s a shortstop with unparalleled fielding range, a super strong arm, and his hitting stats are also super. In our 2021-22 season, he was the top hitter in the Sun Division with a .823 average. He slugged 39 homers, fourth in the league, while his 1.498 slugging percentage (a measure of average and power) was also best in the division.

You’d think that with those stats Marty might have a little swagger in his walk and talk, but just the opposite is true. In real life, he’s the mild-mannered Clark Kent to the Superman on the field. Witness the fact that he was named Sportsman of the Year by vote of the Sun Division managers. Marty said he loves everything about Sun Lakes softball; where else can you make 80 or 90 new friends in less than two years when relocating to somewhere new?

Marty’s life story certainly is not all baseball and softball. His number one priority is family. Marty and MaryKay were married in 1983 and had three children. Sadly, Jessica Marie, their first-born, passed at age eight. The boys, Kenny and Jake, both excelled in baseball and football, and now the five grandkids are following suit.

Marty’s 37-year work career was entirely with Commonwealth Edison. He worked as a lineman and later as a high liner. He says he loved his work, had great benefits, pension plan and pay, so why do anything else?!

Outdoor activities are another interest. Marty enjoys camping, backpacking, and bow-hunting for deer, elk, and turkeys. The Hobbys own a cabin on 40 acres near Beardstown, Ill. Marty spends three to four weeks at a time there in the summers, hiking and hunting.

MaryKay and Marty also enjoy dancing and attending live concerts. In fact, when Marty retired from ComEd on his 55th birthday, they attended an AC/DC concert then hopped in their car and drove the “Highway to Hell” to Arizona! They first lived in Queen Creek near the San Tan Regional Park where they enjoyed hiking, biking, and golf before discovering Sun Lakes … and softball again!