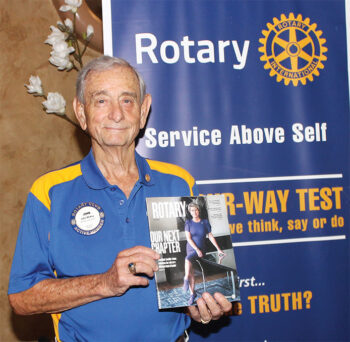 In 2016 members of the Rotary Club of Gilbert attended a water conference in Phoenix. At the conference, a representative from DigDeep explained the organization’s work in the Navajo Nation and how it was bringing water to the people living there. DigDeep delivers a 1,200-gallon cistern, which is then buried outside the home. Technicians plumb a sink, water heater, filter, and drain line. Where families don’t have electricity hookup, a solar panel is installed with battery array and electrical hookup to provide electricity to power the pump and lights. A tanker truck arrives and fills the cistern with clean water through an above-ground valve, and the homeowner receives training to operate, maintain, and repair the system, as well as a number to call should problems occur. All this unfolds over 24 hours.

The Gilbert Rotarians learned that each installation costs $4,500. The Gilbert Rotarians worked with RI District 4185 in Mexico to co-sponsor a global grant to support the Navajo Water Project. With the assistance of RI Arizona District 5495 Rotary Foundation Chair and RI R-Club Southwest, Jim Bissonett, a global grant was initiated. Per Mr. Bissonett, the real story is the Navajo Nation is in our backyard. He recalled the eagerness of Gary Whiting of the Rotary Club of Sun Lakes (RCSL), Sun Lakes resident and a past RI District Governor, saying RCSL wants to do a project like that!

In May, 2018, the Rotary Club of Gilbert and its international partner in Mexico, the Rotary Club of San Andres Cholula, launched the first phase of the Navajo Water Project. Backed by a $78,000 RI Global Grant, they provided home water systems for 18 families—the 64 individuals near Thoreau, N.M. A year later, RCSL finally got its chance when the club partnered with the Rotary Club of Brantford-Sunrise, Ontario, and completed the second phase. Also set near Thoreau, N.M., the project provided home water systems to 33 families—that’s more than 100 individuals with the support of a $144,000 global grant. The final tally for the third global grant for the Navajo Nation totaled $395,000. Its international partner was the Rotary Club of Merida-Itzaes, Mexico, and its host club was the Rotary Club of Four Peaks (Fountain Hills), Ariz. Because of COVID-19, quarantine restrictions were put in place, and DigDeep could no longer interact directly with residents of the Navajo Nation. During the first 18 months of the pandemic, DigDeep delivered more than a million gallons of water and set up temporary water access tanks at almost 1,500 homes.

The Rotary magazine article goes into detail about the Navajo Water Project and life within the Navajo Nation. At a recent RCSL dinner meeting, RCSL Rotarian and Sun Lakes resident John McKoy provided an overview of the Navajo Water Project and its significant impacts. Mr. McKoy, along with Mr. Whiting and RCSL Rotarians Peter Meade and Stan Kaufman, participated in the RCSL’s portion of the Navajo Project’s RI Global Grant. Mr. McKoy and Peter Meade presented the project at the 2018 RI International Conference in Toronto, which had over 25,000 attendees. Additionally, at the RCSL meeting, Mr. McKoy shared his childhood experiences as a member of the Oklahoma Chickasaw Nation and later in life his interactions with Sanders AZ Navajo Nation schools.