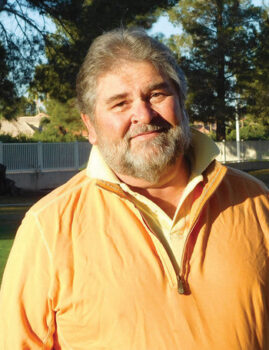 After retiring in 2005, Gayle and his wife Susan began spending most of their time in Sun Lakes where they had owned a home since 1997. Gayle immediately joined IMGA and MOGA and has remained a member since. In 2009, for Gayle’s 60th birthday, Dennis Allen and Gayle started the three-day Ryder Cup format Gayle King Invitational Golf Tournament at Ironwood. The main purpose was to develop a fun tournament and to offer prizes to the players who competed, along with refreshments and food. The tournament was and remains a huge success. When Eddy Renio took over from Dennis, he suggested that Gayle include the Oakwood courses and increase the event to 70 teams.

Professionally, Gayle spent all his career in the funeral home industry. He was born in St. Louis, Mo., and while in high school, at the age of 16, started working for a funeral home where he was taught embalming and funeral arranging. Gayle decided that this was the business he wanted for a career.

At 18, his employer suggested that he take the test to become an embalmer and funeral director for the State of Missouri. Most states required that you graduate from a two-year accredited mortuary science program before taking the test, but Missouri did not, so Gayle was able to take the test. He passed and earned his funeral director/embalmers license. However, because Missouri law also stated a person had to be 21 years old to practice embalming or funeral directing, he held a license that he legally couldn’t use. His employer suggested he earn a college degree in business and offered to pay for his education. So, in 1970 Gayle enrolled at Pierce College in Philadelphia and earned an associate degree in business. When he returned to St. Louis after college, the management of the funeral home had changed, and Gayle’s ideas about the funeral business had also changed. He no longer thought that selling funerals was what he wanted to do, but he still wanted to work in a related field.

Gayle began working for the Washington University School of Medicine in St. Louis as an embalmer for the body donor program. He was there for 28 years before retiring. In 1984, while working for the medical school, he decided to start a business that offered direct cremation. That business, St. Louis Cremation, prospered and is still in operation today and run by his two sons. As part of his business, Gayle often meets people who cannot afford the cost of cremation, so he started a not-for-profit business called the National Body Donor Program. The program accepts bodies that are embalmed and made available for institutions to use for medical education. Once the schools are finished with their studies, the cremated remains are returned to the family. This is all at no cost to the families.

Gayle continues to be an ardent supporter of the IronOaks golf programs. Thanks, Gayle!