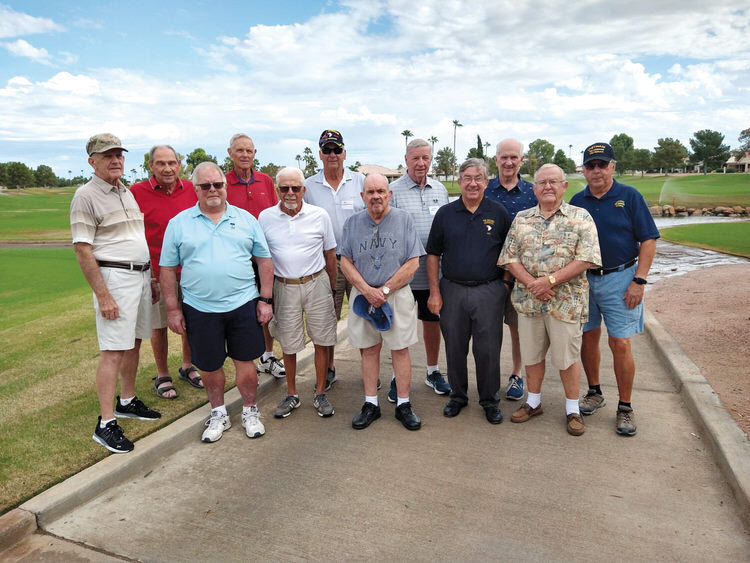 Thank you, Ironwood Men’s Golf Association (IMGA) Veterans, for your service to our country! Included are stories Veterans shared about their experience.

Bob Royer: A pilot in the U.S. Air Force, Bob flew several different aircraft. He spent 1968 in Vietnam, flying 215 combat missions in the EC-47, electronic reconnaissance aircraft. This two-engine, propellor-driven aircraft was a derivative of the DC-3 used extensively in World War II. In essence, flying low and slow, cruising at 160 mph—it was an easy target. Of course, Bob had days off, so he spent that time doing test rides in modified aircraft.

Bob was awarded the Distinguished Flying Cross and seven Air Medals. After leaving the Air Force, he continued his flying career with Northwest Airlines.

Jack Cook: Starting a new chapter in his life—married, college graduate, and new job, Jack was drafted. After training, infantry was not to his liking, and he attended Officers Candidate School, graduating top in his class. Offered a choice of assignments, he chose Airborne/Ranger School. As he states, “I question that wisdom. Learning skills for civilian life. Like how to sleep standing in knee-deep water and navigating in darkness through jungle swamps.”

In 1969 Jack was assigned to field artillery as a Forward Observer (FO). His mission was observing and directing long range artillery at an enemy, working hard to avoid it—and a long walk home for Jack.

Promoted to 1st Lieutenant, Jack saw action at LZ Dory, five miles from Cambodia—a mortar attack, which ultimately killed a good friend and nearly killed him in a helicopter crash. Later, they lost eight soldiers in an ambush. Jack was awarded the Bronze Star for his actions.

Ordered to Ft. Hood, he negotiated staying in Vietnam as Battalion Liaison Officer, living on the South China Sea. An assignment with a bed, hot meals, and movies nightly. A decent life until he contracted malaria. Moved to a VA Hospital, he found the hospital depressing. He would lift his spirits and others by writing letters for soldiers that couldn’t. Subsequently, Jack was diagnosed suffering from Agent Orange exposure.

Bruce McCorkle: “I ran up the hill through the jungle screaming Lonnie’s name after the boobytrap exploded. Nothing could be done. At 21 years of age, he was gone. His family and friends in Louisville would soon receive a telegram changing their lives forever. That was 51 years ago and is etched in my memory as though it happened yesterday. There are 58,318 names on “the Wall.” Each one has their own story of pain and grief. And that is just one war. There have been many. To those who lost loved ones and friends in service to our country, I’d like to assure you that those of us who served with them will never forget them. We’ll tell their stories of bravery and sacrifice to our friends, children, and grandchildren.”

Thanks to all of our IMGA Veterans!