Robert Edwin Harper was born May 23, 1946, in Huddersfield, Yorkshire, England, the first son of Edwin W. Harper of Piedmont, Calif., and Mabel Whitehead of Dean Bridge, Hepworth, Yorkshire, England. In being named Robert, he continued the Irish Harper family tradition of naming the first son Robert, which had been the tradition in each generation going back to Robert Harper born in Co. Monaghan, Ireland, in 1767.

At just under 6 months old, Robert and his mother were seen off by family at Southampton, England aboard the Queen Elizabeth, sister ship to the Queen Mary, bound for New York at 8:15 a.m. on Nov. 6, 1946. The passenger list shows Mrs. M. Harper and Master R. E. Harper arriving in New York City on Nov. 11, 1946. They then embarked on the Pennsylvania Railroad on Nov. 13, 1946, for a journey on several railroad lines across the entire country en route to their destination of Oakland, Calif.

Robert Harper, who worked in the fleet leasing industry since 1971, passed away at his home in Chandler, Ariz., on June 16, 2022, following a three-year battle with multiple myeloma. He was 76. Harper retired in 2017 after working as the commercial fleet sales manager at Courtesy Chevrolet and Isuzu Truck Fleet Sales Group in Phoenix.

Prior to relocating to Arizona, Harper worked in Memphis, Tenn., as the senior vice president and general manager of Dobbs Fleet Leasing, Inc., responsible for the company’s overall growth and profitability. He worked at Dobbs Fleet Leasing from 2003 to 2008.

Earlier, Harper worked for LeasePlan USA, where he served as vice president and general manager of LeasePlan ADVANTAGE, an outsourcing program focused on serving smaller fleets providing ancillary services such as maintenance management, fuel programs, license and title, accident management, and driver record management. He worked at LeasePlan USA from 1996 to 2003.

Harper started his fleet management career in 1981 at US Fleet Leasing, holding a variety of positions in sales and marketing. In 1991, Harper relocated to Boston following his promotion to regional sales manager for US Fleet Leasing, where he had sales responsibility for the New England states.

He was a 1966 graduate of California State University, Hayward. Following graduation, Harper worked as a broker for Merrill Lynch and as a sales representative for Pfizer.

An avid tennis player and a passionate pickleball player, Harper was an advocate for pickleball in his community of Sun Lakes. He also enjoyed golf and had a reputation for his distinctive form of body English while putting.

He is survived by his wife Connie and his brother David. 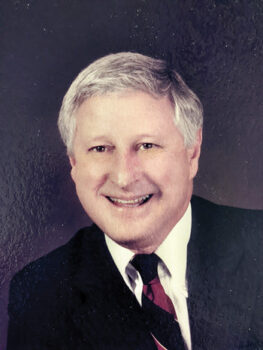 As a young boy growing up in Independence, he had many adventures with his faithful dog Buffer. Buffer was always at his side. He truly lived a Tom Sawyer lifestyle. His family resided one block from President Harry Truman’s home.

Growing up, Rick was an altar boy, Eagle Scout, and lifeguard. At Boy Scout Camp Osceola, he was inducted into the honorary tribe of Mic-O-Say.

He was a graduate of St. Mary’s High School in 1954 and then attended the University of Missouri where he was a thriving member of Phi Delta Theta. While there, he met the love of his life, Judith Anne Walker, a Delta Delta Delta member from Malden, Mo. They married in August of 1960.

Rick had a 40-year career in the polyurethane chemical business with assignments in Kansas City, Omaha, Denver, and Houston. He retired in 1987 from Dow Chemical Company. While in Denver, he served as an officer in the Mizzou Alumni Association of Colorado and continued as a lifetime member of the alumni association.

He was a terrific husband, father, and grandfather and a true son of Ole Mizzou!