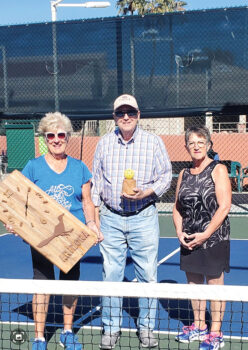 We call it the NIT. That’s short for Norris Invitational Tournament. But it is really short for Norris’s Invitational Tournament. It all started with several sports-minded people interested in getting the newest sport started in the community. Key supporters were Maureen and Dick Norris. Yes, that makes it more than one Norris, so it’s Norris’s, right? This year’s NIT is the eighth NIT. It would be the ninth, but the courts were dark in 2021 due to COVID-19.

It was a long haul for fans and supporters of the sport, because they were essentially starting at Ground Zero. Even though there were several people involved, Maureen led the charge.

It started in 2008 with Maureen convincing the Recreation Committee to allow the use of a tennis court, lining it with masking tape, for their pickleball play. The tape had to be removed after play and was recycled to save costs. Who gathered volunteers to do this thankless job? And who made sure the lines were in the right spots? Dick Norris, of course! They moved to the parking lot at Sisk Park with Dick convincing people to help lay down the tape for court lines a few days a week, every week, and getting equipment set up, and making sure the tape got recycled.

The Sun Lakes Pickleball Club was formed with Dick as the first president and with Maureen following in that position a while later.

Once again, working on and with the Recreation Committee, Maureen convinced them that things had to be better for this growing and popular sport. The HOA agreed to resurface the parking lot with new blacktop and purchased heavy-duty nets. Dick worked with the volunteers for the physical end of things and defined the process for set-up and schedules. But they had to use chalk instead of tape to line the courts, and it washed or wore away! Again, Maureen took on the job of getting painted lines for a permanent fix.

While Dick was the all-around deal-with-the-details guy, Maureen worked on the bigger challenge: getting permanent courts so they no longer had to set up and take down equipment and be limited to certain play days. Maureen once again devoted her energies to making things happen, and four new pickleball courts were ready for play in December of 2012.

And in March of 2014, the first annual Norris Invitational Tournament was held. The Sun Lakes Pickleball Club named the tournament after the Norris’s for their unceasing efforts to get permanent pickleball courts built in Cottonwood Palo Verde.

And that’s why it should be called the Norris’s Invitational. It will always be the NIT. Thanks for your dedication and hard work, Maureen and Dick!