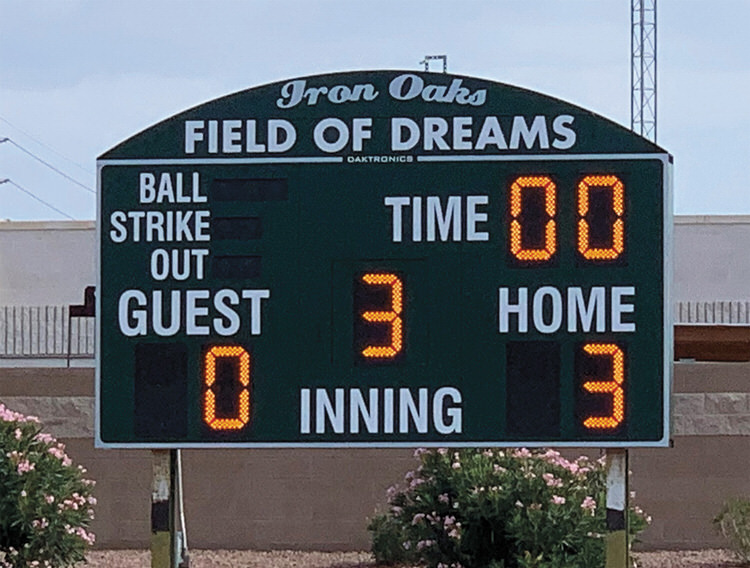 During the off-season, a new scoreboard was installed at the Field of Dreams. Looks great! (Photo courtesy of Zoom-In Photoshop)

The Lakes and Sun Divisions of our Senior Softball League both kicked off their fall seasons on Oct. 26. (Actually, kicked-off shouldn’t apply to softball, should it? How about opened or began, instead? Let’s save “kick-offs” for football!) The fall season continues through Dec. 17 with games scheduled for Tuesdays, Thursdays, and Fridays. There are a few “off days” for the Thanksgiving holiday and a major tournament, so check the Schedules page on our website www.sunlakessoftball.com. Team rosters may also be found on the Members & Rosters page of the website. Additionally, we have a recreational program that includes batting and fielding practices on Mondays and Wednesdays, and pick-up games on Saturdays.

Some of you have asked, “What’s the difference between our Lakes and Sun Divisions?” Well, we have players ranging in age from their 50s to early 80s participating in our programs. Obviously, in general, skill levels, running ability, etc., decline as we age. There are exceptions to that rule but, by and large, the Sun Division’s players are younger, with fewer “artificial parts!” We have somewhat varying rules for the two divisions as well. For example, in the Lakes Division we use a safety screen for pitchers and have 11 players in the field versus 10 in the Sun Division. All in all, this set-up allows for safer and more competitive play and allows players who want to continue playing the sport they love for as long as possible.

We have a total of eight teams, four in each division. This year’s team sponsors are A-1 Golf Carts, Core Photography, Jim Leckner’s Real Estate Agency, The Redeemed Team (Realtors Suzy Steinmann and Michelle Hudak), Skyview Digital Media (Alysa Chapman, principal), Spooner Physical Therapy, and Wolfe & Associates Tax & Accounting Services. Thanks to all these companies for supporting our program.

Go to the Sponsors page on our website to learn more about all these companies, as well as our other advertising sponsors. Without the support from these companies, we’d need to charge much higher fees to keep our program the first-class operation that it has become. So, remember: SOS, Support Our Sponsors!

We were saddened to learn of the passing of former umpire Dick Petrogallo. Although Dick was a professional umpire, he did volunteer umpiring for us. He also conducted rules clinics for our other umpires. RIP, Dick.

This month’s fun fact: There are thousands of sports leagues in the world, some dating from way back in time. However, Major League Baseball has been around the longest of any league still in operation. You might think that the Football League of England may have been around longer, but that is not so. MLB dates back to 1876, while England’s Football League (soccer to us Americans) was founded in 1888.