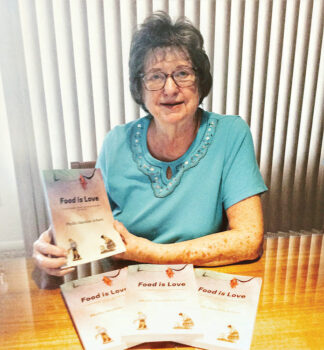 Phyllis Hawkins Schurz grew up on a farm in South Dakota. She had a horse named Snooks. She went to school every day at a one-room schoolhouse, one teacher and 12 to 15 students at every level. She jokes about being Homecoming Queen, because she was the only girl in the senior class. She knew how to cook and sew, and like many others, wore flour-sack dresses made from the fabric containing 50 pounds of flour. They had a “party line” with 10 other families who often listened to neighbors’ conversations. And she spent most of her days trying to figure out how to get away from the farm.

Always a voracious reader, she dreamed about having a life like the characters in books she read. Later, she became the director of a group named Friendship Force, where she led groups of people on tours to places like Korea, Egypt, Russia, and Germany.

Phyllis attended South Dakota State College and majored in home economics. But it was the literature and science classes that held her interest. It was at South Dakota State that she met Jim Schurz, an engineering major. They were married in 1961 and had two toddlers (David and Debbie) when they moved to Sioux Falls where they bought a two-story house for $12,900. It was the late ‘60s, and Phyllis had finally gotten off the farm.

After the birth of her children, Phyllis decided she wanted to be at home with them. That led her to become an entrepreneur. At different times, she ran a cleaning business from her basement, ran a pig roasting business, and created a South Dakota Trivial Pursuit game which sold throughout the state.

Soon, the kids had grown into adults, married, and produced grandchildren, Phyllis’ favorite people. She still bakes cookies and sends them to her grandsons at college or wherever they might be. Son Dave moved to Flagstaff in 2005. Debby had already moved to the Phoenix area. So, Jim and Phyllis bought a rental house in Sun Lakes. They planned to use it in the winter. After a few years, they decided they wanted a larger place and moved to the West Lake in Cottonwood permanently. And that is where her book was created.

Food Is Love is a delightful combination of memories from farm life, to Minneapolis, to Arizona. The descriptions of people and places are fascinating, and the collection of recipes endless. There are 13 recipes for bread (her grandson’s favorite food). Anyone who loves unusual stories plus great recipes should buy this book. It is sold on Amazon, or contact Phyllis at [email protected]