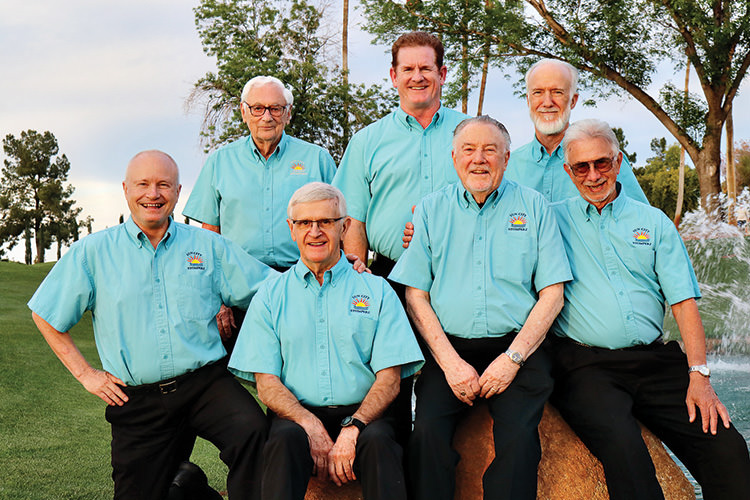 I’m not sure why you would ever do a Google search for the word “stomperz,” but if you did, the first several results would be “A Dixieland jazz band,” referring to the Sun City Stomperz. Next would be chunky, platform, canvas, lace-up sneakers (who knew?), then a Twisty Petz Stomperz Elephant which is a toy that turns into a bracelet. If you look hard enough, you might find a youth, fast-pitch softball team from years ago.

Ernie Landes, leader of the Sun City Stomperz, explained how they derived their name. At the time the band started, residents from the Sun City area would most likely make up the majority of their audience, and Ernie always found the word “stomp” an attractive sound. When he suggested “Stompers,” another band member suggested a “z” instead of an “s.”

The Sun City Stomperz have been delighting music lovers on the west side of the Valley since 2005. Ernie plays trombone and became enamored with Traditional Jazz while attending Stanford University. Bob Scobey and Turk Murphy were popular in the San Francisco area at that time. The rest of the band is comprised of talented local musicians: Clark Chaffee (drums), Barry Clapper (clarinet), Matt Mooney (banjo), Dan Reed (trumpet), Lloyd Shaffer (piano), and Chuck Stewart (tuba).

The Stomperz will perform for your listening and dancing pleasure from 1 to 4 p.m. on Sunday, March 22, 2020, at the Crowne Plaza Phoenix – Chandler Golf Resort, One San Marcos Place, Chandler. Cost is $15 for Arizona Classic Jazz Society members; $20 non-members (become a new member and get in free on the 22nd; yearly membership $35 couple, single $25). For more information, go to www.azclassicjazz.org or call 480-620-3941.