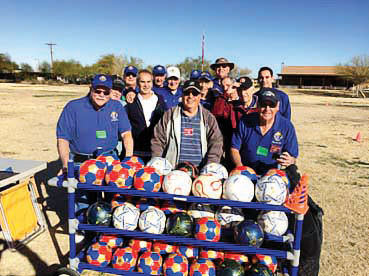 For the past 15 years, Council 9678 of the Knights of Columbus has conducted a Soccer Challenge event for the students at St. Peter’s Indian Mission School. The school is located seven miles south of Sun Lakes, on the Gila River Reservation. The 200-plus students are divided into two groups: kindergarten to 4th grade, and 5th to 8th grade. The school’s physical education instructor Alyta Hilliard works with the younger group and assists the Knights in conducting the competition with the older group, all according to National K of C guidelines.

A standard soccer goal is used to measure 15 kicks. The top corners are rated at 20 points, the lower corners are 10 points, and anywhere else in the goal gets 5 points. The occasional clear miss of the goal is, of course, zero points. After the competition, the Knights furnish lunch for the participants and present awards trophies at a moving ceremony in the school chapel.

Council 9678 member Bill Triquart has ably chaired the event since its inception. A native of Northeast New Jersey, Bill attended schools in Paramus, N.J., and graduated from Stevens Institute of Technology in Hoboken, N.J. He joined the U.S. Air Force in 1961, through the ROTC program, and after finishing flight school, was stationed at McChord AFB near Tacoma, Wash. He flew cargo aircraft for three years and spent a fourth year serving in Vietnam. During his tour of duty, he met and married Kathy Genardine. They later adopted three children.

After leaving the military, Bill joined an engineering/surveying firm in Tacoma, Wash., where he became a partner in 1981. Bill and Kathy “semi-retired” in 1992 to become “snowbirds” and build their first home in Sun Lakes. Sadly, Kathy passed away in 1996. In 1997 Bill married Anne Thompson, and they built a second home in Sun Lakes. They continue to spend summers in Western Washington. Bill and Anne have 10 grandchildren who live in Washington and Oregon.

Bill joined the Knights soon after arriving in Sun Lakes, achieving the highest membership category, the Fourth Degree, in 2013. He said of the Knights, “This was an excellent way to meet and mingle with fellow Catholics! I especially enjoy working on projects, such as the Soccer Challenge and the Family Breakfasts, which generate funds for various charities.” Besides his heavy involvement in the Knights, Bill plays a lot of golf and tennis and enjoys working in his yard. Anne is an accomplished bridge and Mah Jongg player and enjoys dining with friends at the numerous restaurants in the area.