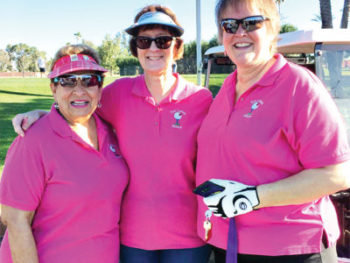 The Sun Lakes Lady Niners had only three days of league play in January, the fourth being their Partner Scramble. In writing this article, I thought I would include some famous golf quotes for your entertainment.

The game for Jan. 21 was Blind Holes. First place in Flight 1 was Rosie Raisanen with a 29, second place was Rose Gallagher with a 32, and third place was Susan Geis with a 34. In Flight 2, first place was Verla Matuschka with a 31, second place Liz Tollefsen with a 30, and the third-place winner was Liz Tollefsen with a 35. “I have a tip that can take five strokes off anyone’s golf game. It is called an eraser.” ~ Arnold Palmer

The Partner Scramble was held on Jan. 28, and a good time was had by all, especially the winners. On the front 9, the first-place winners were Bunny and Al Lumberton, Joann Brown, and Peter Cobb. Second place was Jan Sykes, Ed Wenzel, and Janis and Gary Downing. Third place was Jackie and Denny Aagaard, Susan Geis, and Jane Townsend. Closest to the pin was Janet Drummond, and closest to the line was Susan Geis. “The older I get, the better I used to be.” ~ Lee Trevino

On the back 9, the first-place winners were the team of Rose Gallagher, Dottie Wodraska, Dan Kerberger, and Paul Cosglove. Second place was Roz and Garnett Pederson and Sharon and Joe Fratiello. Third place was Fran and Walt Kleinsteuber, Ann Hegney, and Dave Planting. Closest to the pin were Ann Hegney and Paul Cosglove, and closest to the line was Carole Kinderman. “If you really want to get better at golf, go back and take it up at a much earlier age.” ~ Thomas Mulligan

The Sun Lakes Lady Niners are always looking for new members and are very supportive and welcoming. Please consider coming out and hitting and having a ball with them.