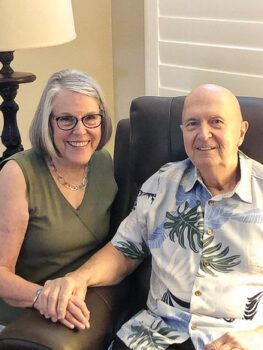 When Jim Banyai moved to Arizona to retire, he knew he and his wife Judy were going to love the weather and the beauty of the Arizona desert. After a busy life, plans for an active adult retirement were shaping up. With all the attention and thought they invested, what could put a kink in their plans?

Judy remembers the stark punch they felt after Jim was diagnosed with dementia. Yet, there also was some sense of comfort and relief to discover what was happening to her husband.

“It was still frightening, of course, but at least there was a name for what was happening to my husband,” Judy explains.

She couldn’t know then how their lives would change from trotting around the world, racing sailboats, enjoying trips to South America, and cruising the U.S. in their fifth wheel RV. Eventually, the difficulties emerging from his diagnosis, along with other physical health issues, would ground them.

As two socially-connected and active people, when issues revealed themselves gradually, it was tough. Both agree that the medical care and attention Jim received was remarkably helpful. In fact, Judy says the education and support carried them through the beginning of their dementia journey.

“The more I learned, the more I could help Jim and myself more efficiently. Education continues to be the most powerful tool to managing life with dementia,” Judy pointed out.

As time marches forward, favorite activities ended as the disease progressed. A woodworker, Jim enjoyed creating things. Eventually, he no longer could use the equipment.

“The most traumatic thing, though, was when Jim was forced to stop driving,” Judy said wistfully.

One surprising fact, Jim often has a better memory than Judy’s. In fact, many do not realize that long-term memory may remain sound for some time. One to one, Jim can share his own stories and is still aware enough to ask whomever he is chatting with about their experiences.

Several years ago, Wayne Mangold, also of Sun Lakes, was frustrated finding help for himself and his wife living with dementia to keep active, be social, and enjoy activities together. Consequently, he began a music program for people living with diseases such as Parkinson’s and Alzheimer’s. Soon a second program, already enjoying popularity in Tempe, known as The Memory Café, was begun. A weekly 90-minute session, the Café hosts people living with memory loss and their caregivers. Hosted at Sun Lakes United Methodist Church, the Café is on Mondays at 9:30 a.m. beginning with refreshments. The group visits and welcomes any newcomers for 30 minutes. At 10 a.m. the partners living with memory loss are treated to a one-hour session of activity, while the caregivers gather separately for a facilitated support group. The activity may be a historic look at marching band music, a trip through Italy through food and music, or just about anything.

Overcoming reluctance, Jim and Judy visited the first Memory Café. At first, Jim was apprehensive. Yet, Judy said he enjoyed the very first meeting, making conversation with the group.

“I find it interesting to keep conversations going and contributing,” Jim said, “I have also been labeled the comedian of the group.”

The activities in the engagement session do more than entertain. Topical sessions and the musical weeks inspire the attendees to remember personal stories that they share with everyone. Other weeks, the group is led through movement to become more limber and less stiff.

COVID impacted the Memory Café when meetings moved to Zoom.

“Zoom was pretty good, better than not having it,” Judy said, “But, it just wasn’t as much fun as in-person.”

Friendships here are happily forged. The Memory Café now meets in-person again at the Sun Lakes United Methodist Church. These friends look forward to seeing each other and welcoming new attendees. Yet, others in the community who could benefit are still reluctant.

“I am so lucky to have a resilient wife who is creative and takes great care of me, but we both are better because of The Memory Café.”

To learn more about The Memory Cafe, visit SLCEP.com or write [email protected]