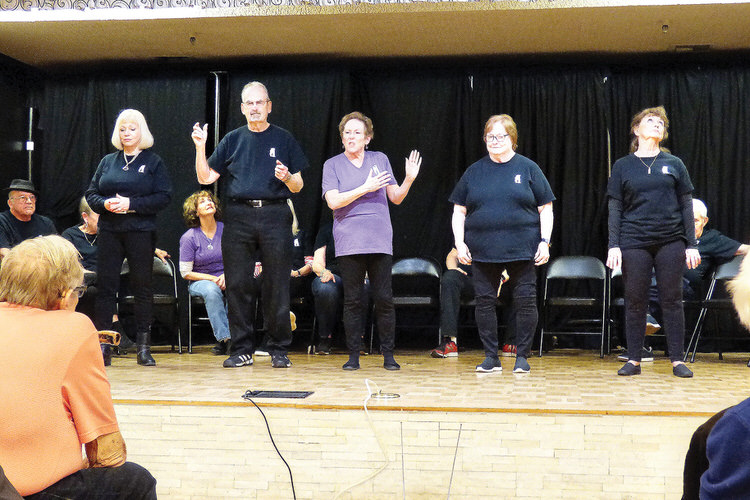 After two years of hiatus due to COVID-19, Sun Lakes Community Theatre’s touring improv comedy group, The ImproVables, has sold out two consecutive shows. But what do we really know about this zany group of performers? Around 2010, Phyllis Novy asked a friend to lead a two-day improv workshop for Sun Lakes Community Theatre. It was very successful. One of the club’s members said to her, “We could do this ourselves!” A lightbulb went off. Of course, they could! Phyllis had taught acting, including improv, for years at ASU and had also been in a touring improv company. She assembled a group of fellow enthusiasts and tossed around some thoughts and ideas. That started the group, and they chose the name, The ImproVables.

The troupe averaged about four shows a year. They performed in places such as Apache Junction, Coolidge, San Tan Valley, Scottsdale, and Phoenix. In 2014 they were selected to perform and demonstrate their skills for the National Conference of The Association for Theatre in Higher Education, which was held in Scottsdale.

Another fun show was performed in connection with Off the Cuff, a Chandler improv group, and their children’s group, Off the Cuff Junior. They called the show, “Generations,” and they have plans to do this again.

After the COVID-19 hiatus, Phyllis wanted to start up the group once again. All of the community needed to be together and laugh again. She held a one-day workshop, and from that seed, a group again blossomed. Seven original members remain as part of the new 19-member troupe.

So, what would you expect at one of The ImproVables’ shows? An evening (or day) of laughter! Every show is unique and different, because it is not rehearsed or written or planned ahead of time. The skits, called games, are off the top of their heads and improvised, usually based on suggestions and ideas from the audience. The audience is practically a participant in the shows, and sometimes a few audience members are literally in the show! The results are hilarious!

The ImproVables will be performing at Cottonwood on April 22 in the Saguaro Room. A few tickets may become available. Residents can go to www.ticketsource.us/sunlakes-hoa-2. The troupe is also available to be hired for club events, parties, and organizational meetings. If interested in booking The ImproVables, email Phyllis Novy at [email protected]