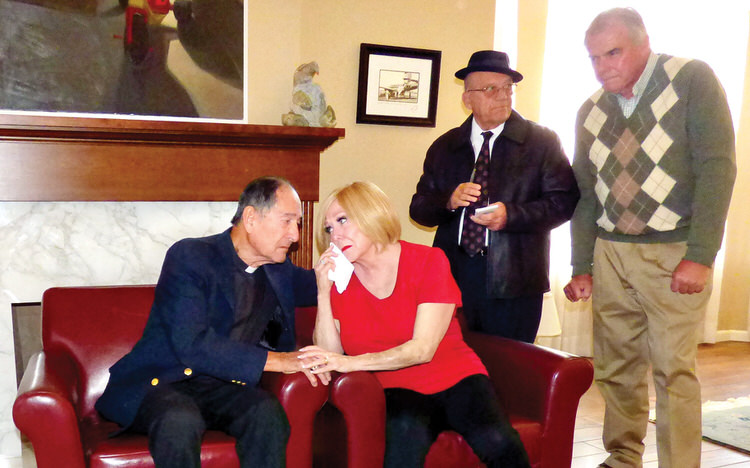 A chalet in the Catskills. A couple on their honeymoon. A lovers’ spat, and suddenly a mystery unfolds. It seems that the bride is missing, and that’s just one of the cases the rural detective has to solve. A kindly priest enters the picture with the missing honeymooner, expecting a joyful reunion, but her husband claims he doesn’t recognize her at all. What is going on?

That’s the plot of the upcoming Sun Lakes Community Theatre’s spring production entitled Catch Me If You Can. The show was a stage play from the mid-sixties and very popular both in America and Britain. Several movies have been made under the same title, but none of them resemble this physiological thriller/comedy/mystery. This show will keep you guessing right up to the bitter end.

The cast is hard at work at rehearsals, sharpening the lightning-fast dialog and honing the witty remarks of Detective Levine, the poor policeman tasked with finding out whether Mrs. Corban is who she claims to be or if Mr. Corban is having a mental breakdown. (Levine is played by Rich Paladino and Mrs. Corban by Kate Turner.) The helpful Father Kelleher tries his best to assist all parties in staying calm, but Mr. Corbin is out of control and volatile. (Portraying Kelleher is Mario Carranza, and Lorin Hicks plays Danny Corbin.) Other cast members include Michael Carter as Sidney, the local deli owner; Dennis Dennehl as E.P. Parker, Danny’s boss; and Maria Blanding as Mrs. Parker.

Shows run Wednesday through Sunday, April 27 through May 1, at Cottonwood Country Club in Sun Lakes. Tickets are $16 apiece and are on sale beginning April 6 at www.infoslct.com. The May 1 show is a 1 p.m. matinee, while all other performances are at 7 p.m. For more information, call 480-382-6290.