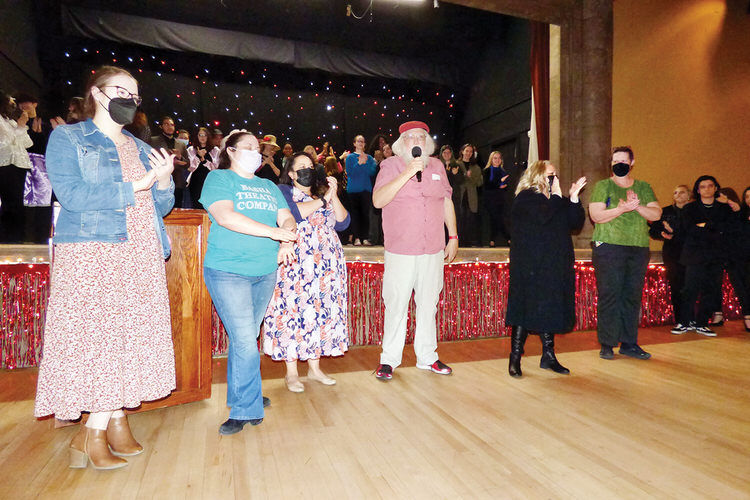 On Thursday, Feb. 10, prior to the general meeting of the Sun Lakes Community Theatre, the members in attendance were treated to some delightful entertainment. Actors, singers, and dancers, all members of their high school theater groups, were invited from five local Chandler high schools. They included Basha, Casteel, Chandler, Hamilton, and Perry High Schools. The scope of the talent was amazing. Basha High School’s group of students opened with a song and Bob Fosse dance routine from Chicago. Casteel High School followed with a beautiful rendition of “Seasons of Love” from Rent. Chandler High School did an adorable version of “Singin’ in the Rain,” complete with umbrellas. Hamilton High School had solo artists. One sang “Stupid With Love” from Mean Girls on Broadway. Another sang “Mad Hatter.” Finally, Perry High School had a student perform a monologue from Laughing Wild. The closing act from Perry High School was their Improv team.

The students from all five schools did a final number together from Annie, ending the acts.

Following the entertainment portion, the five high school theater group directors were called up by Roger Edmonds, SLCT liaison with the schools. The SLCT Board of Directors had checks for each of the five schools, valued at $750, to use toward continuation of their fine programs. Each director also gave info on upcoming productions. Chandler High School will present Legally Blonde, the Musical, on March 3 through March 5 at 7 p.m. in the Chandler Center for the Arts, Mainstage.

It was a fun night for all involved. The students and directors were happy to receive the donations, and the members of SLCT were thankful for the entertainment. Visit www.slctinfo.com for information on upcoming shows. If you’d like to become a member, you can find the form for that on the website as well.