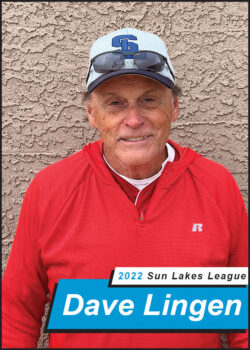 A proud “farm boy” from Mantador, N.D., Dave Lingen was the third youngest of eight brothers and one sister. It seems that his parents wanted to ensure they had enough workers for their 3,000-plus acres of farmland where they produced wheat, soybeans, and other grains and raised livestock, primarily to feed the family!

Dave attended St. Francis Academy in nearby Hankinson, where he was a point guard (and leading scorer as a senior) on the basketball team and ran the half-mile and mile relays on the track squad. But it was baseball, and later softball, that were his main sports. St. Francis didn’t have a baseball team, but Dave played American Legion ball, starting early as an eighth grader and continuing through high school. In some cases, the Lingen brothers made up over half the team, and on some area amateur teams, it was all-Lingens! Dave credits playing with his older brothers with helping him develop more quickly than others his age. “They made me better,” he says.

He began playing slow-pitch softball as a young man and has played ever since on many teams, including top tournament teams like the Dustex ball club. In fact, he’s played on one team that’s participated in the prestigious McQuade Tournament in Bismarck for over 40 years, with his team winning multiple championships. That tourney draws over 400 teams annually. Dave’s also a member of our local Desert Bats travel team and is a slick-fielding second baseman and high average hitter in our regular Sun Lakes League.

After earning a B.S. in business administration from the University of North Dakota, Dave worked for Country Kitchens, then Woolco for a few years before joining a Bismarck-area Chevrolet dealership as a salesman. Little did he know that that was the start of a 35-year career as an automobile salesman, then a sales manager for the last 15 years. He was named to Chevy’s Legion of Leaders as a top salesperson in the Midwest for 10 years and as a Gold Member for top sales managers five times.

Dave met his wife-to-be Nancy while they were in college. They’ve now been married for 47 years and counting. They have a son, daughter, and two granddaughters. The son and his family live in Mandan, a Bismarck suburb, while their daughter is in Minneapolis. The Lingens are so-called “snowbirds,” spending six months here and the other six back in North Dakota, where they have a lakeside home with a dock for their 18-foot Bayliner. Boating and fishing are summertime activities, along with golfing. They also love spending time with their two granddaughters in the summer. And, of course, Dave plays softball in a wooden bat league in Bismarck!

Nancy and Dave really enjoyed traveling pre-pandemic. They’ve taken over 15 cruises, primarily throughout the Caribbean Islands and Mexican ports, with their favorite being a Panama Canal cruise. They’re looking forward to doing that again “whenever this all ends.”